The Vault: a missing John Carpenter 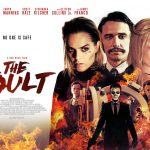 What a great little (under 90 minutes) movie this is! Is it one of these movies that will herald the rebirth of the long lost & last seen in the 90s, genre movie? I’m not so sure, but it fits the category indeed.

The loose story is a bank job gone wrong, set against the backstory of another bank job, from the same bank, also gone-wrong 30 odd years prior. Support comes from James Branco and Clifton Collins Jr, with the main goings-on and tension between Taryn Manning and Francesca Eastwood. So, without spoilers, what can you expect? Plenty of tension, scares, chills down the spine and a more thoughtful approach to the genre. Things aren’t as simple as a simple horror-heist movie – there are mysterious goings-on and clues along the way, if you can spot them. In hindsight once the reveal has been played-out, I realised what I’d missed and I’d love to watch The Vault again knowing what I now know. I think I’d like it even more.

Things I really liked about this movie are numerous – from its run-time (listeners will be familiar with my rants against 2.5 hour “epics” from the likes of Marvel Studios) through to James Franco’s shy bank manager, keen to get the bank robbers into the basement where the safe containing the most money is and the really creepy ghost-like ghouls with bags over their faces. I also love the fact that despite the short run-time, the audience still gets a good ending, right to the very bitter end and that you’re not asked to be frightened with obvious jump-scares that in time, wear off. It’s a well thought-out and put together movie offering something a bit more thoughtful than a lot of the wider horror genre offers.

If I were being harsh I’d say they could have upped the gore a bit, but there’s enough to go round come the end of an hour and a half, that’s for sure. Will it please die-hard horror fans? Possibly not, but nor will it please out and out heist movie fans either. It is however a great mash of the two genres and pretty original in that regard. Perhaps more than anything, The Vault reminded me of a movie that John Carpenter didn’t make in his hey-day. Praise indeed and worth 4/5.

2 thoughts on “The Vault: a missing John Carpenter”