“Are my answers too long?” Sharmila Tagore asks halfway through her answer to the first question about her esteemed lineage (her great grandfather was responsible for bringing Cubism to India whilst her grandfather was the poet laureate Rabindranath Tagore). The truth is one could listen to Sharmila talking all night; eloquent, polished and engaging, whether it was recounting her time in regional cinema or as one of the reigning superstars at a time when art house and commercial cinema were two different worlds, this Q&A was full of amazing anecdotes and stories that as director Sangeeta Datta put it “evoked lost worlds“.

A large portion of the Q&A centred on Sharmila’s work with Satyajit Ray; after a clip from Apun Sansar (The World Of Apu) was shown (which also saw Sharmila rightly questioning why a subtitled version was not shown for all the non-Bengali speakers), she described in detail the direction she had been given and also quoted key dialogues, commenting how economical the words used were but their impact was devastating when delivered under Ray’s direction. A clip from her next film Devi was equally fascinating, especially when Sharmila pointed out they had been shown out of order and presented the context herself. 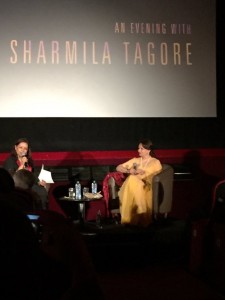 However, it was her work in Hindi cinema in the 70’s that seemed to really get the audience interested – what it was like to work with Rajesh Khanna (did you know Roop Tera Mastana was shot in one take as they only had a few hours to shoot it in), Shammi Kapoor (unpredictable; he would do one thing in rehearsal and then improvise in the actual take) and how Deewana Hua Badal from Kashmir Ki Kali was the first song Sharmila lip synched to and found it challenging as Hindi was not her first language but living in Bombay helped her learn fast.

Then came questions from the audience which Sharmila took on with aplomb – praising Priyanka Chopra, Deepika Padukone, Kangana Ranaut and Vidya Balan when asked about current heroines whilst also reiterating she herself had taken roles where her characters had “agency till the end“. She also spoke about her recent visit to the Lahore Literary Festival as well as her time on the Censor Board, telling how she tried and failed to rebrand it as the CFBC rather than just the “censor board” as well as (in what was the line of the night) “politics divide but Hindi films unite“.

Finishing on the notion that “films are a wonderful profession” and how she had managed to juggle motherhood and work at a time when it was not the norm, one audience member commented how Sharmila was like a representative for women now as much as she was at the height of her star power. With an incredible body of work behind her, felicitated with Festival Icon Award as well as being invited to be a member of the Academy of Motion Picture Arts and Sciences, it will be interesting to see what Sharmila does next.