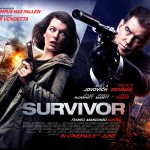 We’re really up for the new film with Pierce Brosnan – Survivor – and this is a great preview clip showing why Pierce can still mix it with both good and bad characters.  And given there isn’t really a terrible movie with Milla Jovovich (OK, I’ll argue about The 5th Element with whomever wants to argue) in either, this really ought to be a winner!

“Survivor” is a thriller about a State Department employee newly posted to the American embassy in London, where she is charged with stopping terrorists from getting into the U.S. And that puts her in the line of fire: targeted for death, framed for crimes she didn’t commit, discredited and on the run. Now she must find a way to clear her name and stop a large-scale terrorist attack set for New Year’s Eve in New York’s Times Square. Pierce Brosnan stars as the Assassin hunting her down – The Watchmaker.

Survivor is out in UK cinemas today (Friday 5th June) Check out the preview clip here, with Pierce Brosnan playing a charming menace.