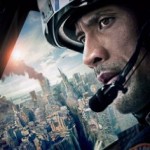 Don’t worry, he’s on his way

San Andreas is the new film starring Dwayne Johnson and imagines what would happen if the biggest earthquake ever recorded struck in California, devastating Los Angeles, before travelling along the San Andreas faultline to wreak destruction on San Francisco.  It is one of many disaster movies that we’ve all watched over the years, so it’s quite a crowded space that San Andreas is joining.  So how does this movie stack-up and what can you expect?  Playing Ray, a helicopter pilot and search and rescue worker, Dwayne Johnson has to make his way from LA to San Francisco with his estranged wife (played by Carla Gugino) in order to rescue their daughter Blake.

I’ll kick things off by saying how much I liked this movie!  With there being a lot of choice in the disaster-film niche, it’s important that there is something to grab the viewer and for it to become more than just two hours of CGI.  Personally, I need more than action set-pieces; I need to get behind the lead characters and for their story to be what keeps my interest.  Happily in San Andreas, this is delivered.  In fact the film almost operates three distinct stories: Paul Giamatti as the seismologist who discovers the true nature of the quakes, Blake and her own journey to find a safe place for Ray to save her and finally, her parents’ journey to find their daughter.  these are interwoven quite nicely indeed and in Dwayne Johnson, there is someone that we hang on to as the film progresses.  There is also an appearance by Iaon Gruffudd as the step-father to Blake, but as amusing as it is, we can count this role as that of the pantomime villain.

After the opening which I thought was a weak spot in the movie, things really get going with a scene at the Hoover dam – which doesn’t last long!  It is amazing to see the Hoover dam busting and breaking and this sets the scene for greater things to come.  As Los Angeles is levelled there are some genuinely tense moments with Ray rescuing Emma from the top of a collapsing building.  We then switch between Blake and Lawrence (Paul Giamatti) as the action slows down for a breather.  But this in no way slows the feel of movie which marches forward at a great pace, never letting the viewer get bored at all.  In particular and as much as I like Paul Giamatti in anything, it is good that his character is pretty much sidelined.  Not because he’s terrible but because his character isn’t meant to be the hero and possesses no qualifications to be the man who saves the day.  This is a frequent problem in movies of this kind – like asking a teacher to grab a gun, shoot some terrorists and rescue the hostages – and San Andreas is much the better for not doing this.

That is not to say there aren’t things I don’t like: some lines are clunky and some events are almost too crazy or not quite that believable.  I am also not sure what the point of a blink and you miss it cameo appearance from Kylie Minogue is, but hey-ho, always good to Charlene Ramsey from Neighbours in something other than a music video.  That said, if you place your faith in the story and characters, then you will be rewarded with a great movie.  It’s very easy to make these things over-long so a running time of 114 minutes feels like a breeze and adds to the pacy feel.  There are some jaw-dropping scenes of destruction and they’re all highly watchable with a tremendous perspective given to the viewer; nothing complicated and you can always understand what is happening and for why.  Sit back, eat the popcorn, guzzle the soda and enjoy a great movie which doesn’t seek to do anything other than entertain.  Highly watchable but on the proviso that you may not want to see another building collapse on-screen for quite a while!

San Andreas opens in cinemas today and you can get a taste of the awesome from the trailer below.