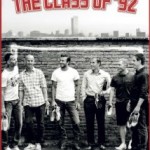 As the resident Upodcasting sport fan and thankfully for this release, long time Manchester United fan it was an absolute pleasure to see this for review.

This is the story of how six 14 year-old working class boys (David Beckham, Nicky Butt, Ryan Giggs, Paul Scholes, Phil and Gary Neville) came together to play for the same club, becoming the spine of the most lauded team in world football and who throughout their period of unparalleled success remained best mates. The film offers unprecedented access to all six players and includes numerous high profile interviewees including Sir Alex Ferguson, Zinedine Zidane, Tony Blair, Mani from the Stone Roses, Eric Cantona and Danny Boyle.

Man United fan or not, if you’re of a certain age you probably know all about the success of the Treble winning team from 1999 and the core of it being a group of players who came through the youth system at the same time. The great thing about this movie is the splicing of archive footage featuring the young players, but also the wider context given to the rise of the Manchester United team throughout the 1990s as Britain picked itself up out of the doldrums and began to feel like a happy place once more. In some ways it is also fortunate that Manchester has such a strong cultural identity of its own; giving rise to such bands as the Happy Monday, Smiths, Oasis, The Stone Roses and being a true centre for the birth of British dance music culture in the ’90s. It makes adding a superb soundtrack somewhat easier and if like me you’re in your mid-30s then you know all of the music. It would be so easy for me to get all misty eyed because this was my music and my team!

But the film comes into its own for not dwelling entirely on the stars of the side. Also featured are the lesser known lights – Ben Thornley – or those who went on to have great careers away from Manchester United such as Robbie Savage. There’s some great stuff involving them all having a kick-about…some players now more, ahem, portly than others. Ryan Giggs was still playing when this was made to put it in context!

As the story unfolds, you really do get to know more about what made the players tick, be so successful and what sets elite sportsmen apart from those who don’t quite make it. The power of your own mind, the will to succeed and make sacrifices, but also the personality of the manager – in this case Alex Ferguson – who was able to drive on his own teams to new heights. There are some wonderful comments from Eric Cantona who played with all of the class of ’92 and from Eric Harrison the youth team coach who brought all of the players through the set-up.

For any fan of Manchester United this is a great movie. It’s also the perfect gift for fathers’ day! The Class of ’92 is released this week.  Check out the trailer below: