After the night (Ate ver a luz): Review 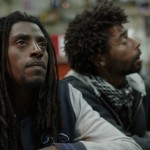 After the Night (Ate ver a luz)

After the night is a portrayal of life in the slums of Lisbon.  Directed by Basil da Cunha we see life through the eyes of Sombra, who returns to his life as a drug dealer after coming out of jail.

His life is a hard one, juggling the money he has lent and can’t get back and the money he owes the local neighbourhood gang leader.  His only sources of comfort are an iguana – Dragon – a young girl called Clarinha and an old fashioned oil lamp.  As the days pass he starts to think he is better off back in jail or perhaps even dead.

The cast all look like they could have lived on the very streets being so realistically filmed, but the lead, Pedro Ferreira is the stand out, bringing a genuinely haunting an unnerving presence.  Sombra (a play on words, it is close to Portuguese for dark/shadow) spends his time living at night and sleeping in his tiny shack.  As he starts to run out of time to pay back his debts, Sombra’s behaviour becomes increasingly erratic as if he is having the very life sucked out of him.  A man who has given up.

I really loved the scenes with Sombra and Dragon; he seemed to be about as happy as he could be and also with Clarinha.  When he starts to let go of the things that mean so much to him I felt particularly sad, knowing that this signified his letting go of life.  After the Night is not a simple watch, but is rewarding.  It is filmed beautifully and like a documentary throughout – the darkly lit scenes with an orangey-gold light are almost halo-like and offer a glimmer of hope.   Some things aren’t quite conveyed as clearly as I would have liked but if you pay attention then you will see some lovely touches.

I have to say that I didn’t really enjoy the ending, but this is purely a personal matter and down to how good the lead is.  Throughout, I was reminded of La Haine (and also City of God to an extent) so it’s great to see a new film maker using such a realistic approach 20 years later.  Not one to take the kids to see, but I recommend you check this out.  After the Night is released April 25th in theatres and VOD.