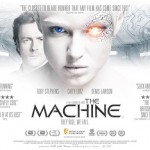 The Machine is a British indie sci-fi movie, first screened last year before its general release in 2014.  Set in the near future, the West is in the midst of a new cold war with China that has sent the world into economic depression.  Technology is leading the race for military innovation and advantage and this is the heart of the film.  Vincent (Toby Stephens) is a robotics scientist working for the British Ministry of Defence (MoD), striving to create the first self-aware robot, but not necessarily for military gain: he has a young daughter with a degenerative muscle disease meaning she will eventually die.  Whilst testing new programming, a new scientist Ava (Caity Lotz) proves to have a breakthrough and is offered the chance to work with Vincent.

The dark secrets inside the military base are revealed little by little as we see Vincent’s experiments (wounded / brain-dead soldiers from the conflict) having their “consciousness” examined.  Unable to show themselves as intelligent, they become confused and violent before being killed.  Leading the mission for the self-aware machine is Thomson (Denis Lawson), who shows little remorse or compassion for anything at all: soldiers who are missing in action and then experimented on are effectively “disappeared”, kept hidden from their own families.  Somewhat disturbingly, most of the soldiers at the base are themselves failed robotics experiments: intelligent enough to follow orders to the letter, but without the ability to communicate with their human masters.

As Ava starts work in the base and programming with her software begins, her curiosity grows and she sees the experiments for the cruel that they are.  After being spied on by Thomson, Ava is “killed” but brought back to life using her own programming.  Vincent, trying to cope with his daughter’s condition sees that she could hold the future, not just for advanced robots but as a way of preserving his daughter – in a pretty weird way.  But the movie really leaps forward on many levels from this point, with Thomson truly showing his colours:  weaponising Ava and controlling and manipulating her emotions for his and the military’s ultimately nefarious aims.  However Thomson, realising the danger that Ava poses, Vincent is asked to remove her conscious.  Tricking Thomson by removing an irrelevant piece of hardware, Vincent sets his course against the military and with the help of Ava and the other robots, escapes from the base to live with Ava and the new version of his daughter.

There is a lot going on in The Machine. All of the above takes place in 91 minutes and if not answered, seeks to question what humanity is, what it is for, what love is, what being human is and how we as the human race must face this inevitable future reality. There are shades of both Blade Runner and Metropolis – drawing on those films’ own questions about the human mind, controlling robots and where the dividing line between man and machine is drawn. How intelligent are we as a species and how easily is this replicated in robots?  This film takes Asimov’s 3 Laws of Robotics and elaborates on them, engaging its audience.

I thought this film was brilliant and for one that I believe to be shot on a small budget. It thoroughly deserves its place among the best of British sci-fi films. Scenes inside the base are perfectly dark and dreary and those in the outside world, lit far more positively. Toby Stevens plays the burdened, frustrated scientist with a weariness and exasperation I could really relate to. I think Caity Lotz does steal the show though. Convincing as a brainbox but even more so as a robot and bringing exactly the right level of humanity required, to the role. The film was apparently shot in Wales on a very low budget and whilst I wouldn’t say that this is obvious or noticeable, it does make sense when you see how sparse the sets are and how they’ve been used and filmed.  It quite rightly won the Raindance Festival Best UK film in 2013.

Unusually for me, I thought The Machine was too short – another 15 minutes or so would have, I felt, given more substance to the wider global context of the robotics arms race and revealed more about Denis Lawson’s character, Thomson. It could also have served to give us more about the relationship between Vincent and Ava. Not to detract from a really great film though. The Machine is well worth watching on the big screen while you can. And if you can’t catch it in cinemas, then definitely watch it in one go, without ads otherwise all the intrigue and ambiguity will be lost. As brightly lit as the final scene is, there is something deeply dark being shown here.  A coldly beautiful movie and incredibly thought provoking.

In cinemas right now – here’s the trailer to enjoy.