Director Shoojit Sircar’s latest – Madras Cafe, sees him teaming up again with actor/producer John Abraham after the successful Vicky Donor to bring a different story to life. This time, John takes matters in his own hands, as he takes centre-stage as the big and brawny Indian Army Officer Vikram Singh, who is dropped in the middle of a country in civil war. Set mostly in India and Sri Lanka, Madras Cafe depicts the tale of 25+ years of the Sri Lankan Civil War, which eventually resulted in the assassination of one of India’s ex-Prime Minister.

The events in the story demand the plot to be taken seriously, and Madras Cafe wants to be a lot of things. From a political espionage thriller, to a war drama, to even a conspiracy theory about the dealers of war, Madras Cafe does not shy away from the grim side of politics and war. It does not necessarily take any sides, or show a blatant support to anyone. The one opinion it projects however, is how humanity is completely destroyed when the wrath of war strikes. 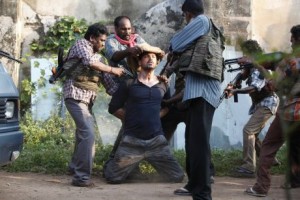 With cinematographer Kamaljeet Negi’s lens sweeping the tropical landscapes of Sri Lanka and the Southern coast of India, Sircar expertly captures the ugliness of how a nation gets torn into pieces when its people go to war. Enter our hero Vikram, who is on a mission to “conspire” peace by dealing with the ones who are the centre of it. Turns out, things are more convoluted than it seems, and caught in the action are not only the neighbouring countries, but a hell lot more. With so many dramatic elements playing, Madras Cafe does get a bit confusing at times.

And yet, it somehow feels a bit inadequate in its storytelling.  The scenes where RAW officers are in a cabinet meeting, making the calls on what would happen on the field is reminiscent to many political thrillers. And yet, it lacks that extra oomph that would grip us. It often feels like the dialogues by Juhi Chaturvedi were instead written by an intern who was provided with an outline of the scene, and just wrote the first thing that came into their heads. It is blatantly obvious at times, sometimes obvious enough to make you cringe.

It is unfortunate to see a brilliant supporting cast such as Siddharth Basu, Piyush Pandey, and the Bongs from Vicky Donor to be undermined by these badly written lines. Having said that, Siddharth Basu does seem effortlessly natural in his role as the head of RAW. Thankfully, there  is no sexual tension explored between John Abraham and Nargis Fakhri’s character, however it did come a bit close. Fakhri is not as annoying here as she was in Rockstar, however her character makes me confused. Why would a war reporter (apparently intelligent and pretty attractive) go in a jungle full of sexually starved men, dressed like she was? All for the job eh! 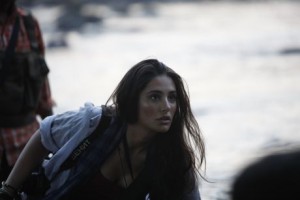 Madras Cafe also sees the debut of News Reporter Debang as a “khabri”, and one can only laugh when he says with a deadpan face – “Ye meeting kabhi nahi hui”  (This meeting never happened).

For those who expected this to be a John Abraham version of Ek Tha Tiger, they would be utterly disappointed. Because our hero is a mere mortal, and not a Sunny Deol, who’d gatecrash the Jaffna border, and win the island back with a handpump in one hand, and a baby in the other. Abraham’s Vikram Singh is a helpless protagonist who is compromised by moles in the organisation, kidnapped, beaten, and who eventually ends up as a drunkard in Kasauli. If you are not ready for your hero to be that, you should rather catch the Chennai Express. John does seem to play his part well, and I think it is all down to a director like Sircar to cut down the theatrics and treat the story as how it should be. However, I do have a problem with the lead guy being treated as one, when it comes to fashion. There are several moments where it does look like a snippet from a shirt advert.

In conclusion, all I would like to add is that Madras Cafe is an earnest effort at telling the tale of the Srilankan civil war and its aftermath. However, it does fall short as a captivating movie, and it is entirely the writer’s fault. There are scenes which you can predict coming from a mile, and for a thriller, that just should not be. With scenes involving hacking code that will make you giggle more than having a “Whoa” moment, Madras Cafe could have been so much more. Instead, it is a fairly simplified version of one of the many espionage conspiracy political thrillers that we have seen.