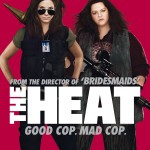 They're coming for you

The Heat is the latest movie from Paul Feig, director of the acclaimed and universally adored Bridesmaids. Starring Sandra Bullock and Melissa McCarthy (also in Bridesmaids), The Heat is about an over-dedicated FBI agent teaming up with a no-nonsense local cop in order to take down the city’s biggest and nastiest drug dealer.

The movie is all about the relationship between the two leads. On the one hand, an uptight, pretty, slim, smartly dressed, ambitious and emotionally detached FBI agent (Sarah Ashburn) and the other a badly dressed, over-weight, insubordinate and slobbish police detective (Shannon Mullins). Both roles are perfectly cast and thankfully not too much of the Miss Congeniality from Sandra Bullock. There are some good support turns too, from Michael Rapaport, Tom Wilson and Marlon Wayans. I’m really not the biggest fan of Marlon Wayans’ contribution to movie history, but he’s used well here.

Things I loved about this move…well, you think it’ll go one way and then it doesn’t happen – particularly the tooling-up scene! This is important when we consider the genre and how often the buddy-buddy movie, with all its incarnations, has been done: Lethal Weapon, Bad Boys, Midnight Run…the list is endless. Sandra Bullock. Yes, I do love her in this one and quite possibly I think I fancy her for the first time since the age of 15 (when you really don’t care too much who you fancy). There is less of the Congeniality thank God and just well-acted “straight man” style comedy. And of course Melissa Mcarthy is on top, top form. She has some absolutely cracking one-liners, whilst leaving the physical humour mainly to Sandra.

One thing that did strike me was the seemingly obvious resolution of Sandra Bullock’s problems (too uptight, follows the rules too strictly, no boyfriend etc) but not the same for Mcarthy. She is also overly dedicated, has alienated her family because of this and eats 2 week old sandwiches. But Sandra seems to have the moment of catharsis and the penny dropping and not Mcarthy. Other than that, I’m sure if you wanted, you could pick many holes in things – such and such would never happen, the FBI doesn’t work like that, blah blah. But then bridesmaids (I hope) don’t act like that in real life either.

So then, so far I make this the 2nd funniest film of the year/summer. No shame in being 2nd to the World’s End, none at all. I’ll have to wait and see what This is the End delivers of course, but doubt it will have the charms of The Heat. In some ways, this is almost the ideal date movie: plenty in it for both him and her, neither too girly (e.g. any comedy with la Anniston except Office Space) nor too boy-ish (e.g. any Bruce Willis film). Go to the cinema, get out of the heat and see The Heat. And do look out for the knife scene – truly excellent.