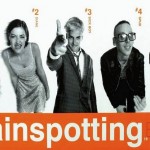 After 17 years, the cast and crew of the brilliant British film ‘Trainspotting’ (1996) came together for a very special reunion screening in London.

The first in a series of Classic Cinema Reunions, the Trainspotting event was curated by the London Film School in support of their exciting and ambitious capital campaign. On stage at the Ciné Lumière in South Kensington after the film were director Danny Boyle, actor Robert Carlyle, producer Andrew Macdonald and David Aukin, the Channel 4 executive who commissioned this lively, inventive adaptation of Irvine Welsh’s novel in the first place. Also in the room on this special night were the film’s editor, costume designer, director of photography and production designer. The audience was also treated to an appearance by phone from Ewan McGregor, who played the lead character Renton in the 1996 film.

Following the event, Danny Boyle spoke exclusively to HiBROW about his experience in making the film, and how it would be different were it made in 2013.