Releasing this week is the movie adaptation of Beat Girl a novel by Jasmine Kallay, about young Heather Jennings (played by Louise Dylan known to some form BBC’s Jane Austin’s Emma) who after the passing of her mother has to move in with her father and step- brother who she really doesn’t know or have any stable relationship with. She wants to earn a scholarship to Juliard as she’s quite the piano prodigy but along the way stumbles into underground Dj’ing and is torn between what she thought she wanted and the new enticing world that has opened up to her.

Beat Girl is an British independent feature produced by beActive but what’s interesting is that it’s simultaneously being released as a book, game, web series and of course the movie itself. We always want to support new initiatives and release strategies even though the target audience of the movie is women between 18 -35.

Or at least that’s what’s intended; unfortunately the real audience is probably a bit younger.

Struggling with a small budget and a very young cast, Beat Girl has its heart in the right place and delivers a few earnest 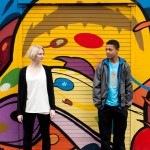 performances especially from Louise Dylan and Percell Ascot (playing her younger brother). That was the main story line that I connected with most and I appreciated how casually a multi race family issue was dealt with. Unfortunately that story line gets side tracked by a romantic plot with Craig Daniels (playing Toby, the DJ Yoda), which lacks any semblance of chemistry.

The overall story of Heather being stuck between being a classical pianist or a DJ is just half baked and never really makes the viewer believe she has the skill or drive to be either.

The direction, cinematography and music are at the level of a day time soap or a TV movie for young teens that lack any sense of irony, I just don’t know if those teens exist, as I doubt people like Heather or Craig do either.

Although it has it’s heart in the right place, and an innovative way of releasing a project but unfortunately Beat Girl just misses the beat.