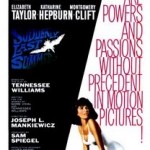 An under the radar classic

Suddenly, last summer. But for me, more a case of: finally, this winter. Courtesy of the BFI Southbank and their screenings of Montgomery Clift movies I was able to catch this excellent movie. Also starring Elizabeth Taylor and Katharine Hepburn, this 1960 film by Joseph Mankiewicz was the second highest grossing of that year (behind Psycho, and there’s no shame in that) and I can see why. In addition to the fine cast, this movie was produced by Sam Spiegel and the screenplay written by Gore Vidal.

Based on a Tenessee Williams play/book/novel Suddenly, last summer is the story of neuro surgeon Dr. John Cukrowicz (Clift), a wealthy patron Violet Venable (Hepburn) and her niece Catherine Holly (Taylor). Wanting to commit an emotionally disturbed Catherine for a lobotomy, Hepburn is trying to hide the events of the previous summer – when her son died – from possible public exposure and gossip. Woven into this are strands of professional medical ethics, homosexuality & pederasty, greed and motherly love bordering on obsession.

Williams himself a known homosexual, was not long out of therapy and battling his demons when he wrote the play and this is so clearly reflected in the screenplay. Further to this, the production suffered myriad problems: subject matter was of deep concern to the backers/studio/censors, Hepburn had to take second billing to Elizabeth Taylor for the first time since 1933, Clift was a law unto himself, the bottle & painkillers and upon completion, Hepburn actually spat in Mankiewicz’s face. Furthermore, Elizabeth Taylor was still mourning her fourth husband whilst married to her 5th. When filming for the most climactic scene finished, so emotionally drained was she, that she needed to be helped off the set by crew.

Plenty of off-screen matters to keep a viewer interested there and the outlines I’ve given don’t reveal too much. I really do rate this movie – a fantastic and gruesome story, Katie Hepburn playing someone as deranged as Angela Lansbury in The Manchurian Candidate and Elizabeth Taylor absolutely perfect as someone made to believe they’re insane enough to want to be lobotomised. Another great chance to watch some screen greats on fantastic form.