Olympus Has Fallen: New Clips, Trailer and Behind the Scene Featurette 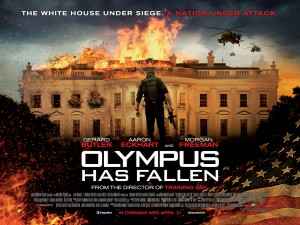 Basically looking like Die Hard in the White House, Antoine Fuqua’s next starring Gerard Butler and Aaron Eckhart looks kinda fun. He’s not a director I anxiously await a next release but when I do stumble across his movies, they usually tend to surprise me.

The new clip is hilarious, every actor manages to keep a straight face whilst we get a summary of Gerard Butler’s particulart skill set.

He is the best we got DAMMIT!

Let us know in the comment section if you can watch any of these clips with a straight face!

When terrorists take over the White House, a disgraced Secret Service agent attempts to rescue the president of the United States in Olympus Has Fallen, an electrifying and ingenious action thriller from acclaimed director Antoine Fuqua (Training Day). A small group of heavily armed, meticulously trained extremists launches a daring daylight ambush on the White House, overrunning the building and taking President Benjamin Asher (Aaron Eckhart) and his staff hostage inside an impenetrable underground presidential bunker. As a pitched battle rages on the White House lawn, former presidential security officer Mike Banning (Gerard Butler) joins the fray, only to find himself the last Secret Service member alive in the besieged building.

Banning uses his extensive training and detailed knowledge of the presidential residence to become the eyes and ears of Acting President Allan Trumbull (Morgan Freeman) and his advisors. As the invaders begin executing hostages and threaten to kill more unless their outrageous demands are met, Banning tries frantically to locate the presidentâ€™s young son, hidden somewhere in the building, and rescue the president before the terrorists can unleash their ultimate, terrifying plan. As the body count mounts and the clock ticks down, it becomes clear that Banning is Americaâ€™s only hope of avoiding utter annihilation..