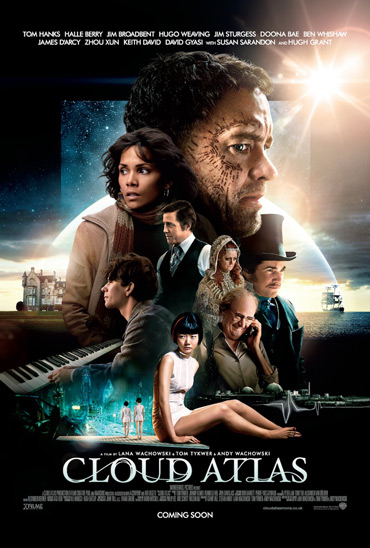 As I stood up from the chair in the cinema, as the end credits rolled, I suddenly realised how desperately I needed a wee. And then, a few members of the audience started clapping. And I yelled “Are you fucking serious”. And I was joined by a few others who agreed to my comment with laughter in unison. The movie I am talking about, is Cloud Atlas – a 3 hour long wastage of reel, acting talent, and a 100 million USD.

And when I say “well, there’s 3 hours I’ll never get back”, I mean it. Now, I am a staple consumer of Bollywood movies, and when it comes to epic 3 hours plus movies, I can handle them, and I have a long list of ones that I loved despite being lengthy movies. But if you are going to make such lengthy movies, please make sure that you convince me to be engrossed throughout the length, rather than make me feel so bored, that I’d start considering shooting myself in the face.

How can I possibly summarise the plot of this movie? But I will try my best.

1930s – Robert Frobisher is having trouble with leading a gay life, and is trying to compose his best work, the Cloud Atlas, and sleeps around with his mentor’s wife.

1970s – An investigative journalist in San Francisco is trying to uncover corporate corruption which could shape the future of energy consumption.

2012 – A troubled London publisher finds himself trapped in a home for the elderly.

2140s – Neo Seoul at the peak of consumerism has designed to grow saleswomen. And some sort of revolution is about to begin.

After the Fall – in the middle of a fuck-all universe – there are cannibalistic tribes, and yet advanced technology, and pristine white uniforms.

You might argue that I am missing the point behind all these stories interlinked by words such as destiny, truth, love, choices, and all that. But here’s my point – It makes no fucking sense. Here are a few of the many things that I thought about this movie:

The movie simplifies the complexity of finding the common thread between the different lives by using same actors play repeated roles. This works in some cases, but fails spectacularly in most of the stories e.g.

I just could not get past the horrendous make-ups of some of the characters. Between this and the Hobbit, I don’t know which one spent more on prosthetic noses, and fake tan.

The language in the “After the fall era” was just an epic fail. Why would a supposedly advanced civilization still use words such as true-true? Also, why are there cannibalistic tribes co-existing with these fusion energy users?

The movie reiterates the point about how we keep making the wrong choices over and over again. If that was the case, why does Hugo Weaving gets to be the twat in every single life of his?

The only part that is somewhat engaging and had the potential of being a movie on its own was the Neo-Seoul part, and you can see the obvious stamp of the Wachowskis in it. Right from the futuristic production design, to the laser action scenes – that was clearly my favourite story of the lot. Although, it does ring a bell – y’know, finding the “one” from a bunch of grown humans, to lead a revolution. Wasn’t that something that the Wachowskis did in the late 90’s?

In conclusion, Cloud Atlas is a bloody mess of a movie. There are too many stories being told, but none of them strong enough to strike a chord. Too many romances, and yet no heart-wrenching love story. It is eye-wateringly beautiful, but at its core remains a flawed film with a fascinating surface. Watch it if you must.

This is a post by our good friend Sujoy’s  who is also know as @9e3k on twitter and his wonderful Gif’s have been featured all over the interwebz!