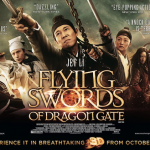 After the massive success of Crouching Tiger, Hidden Dragon back in 2000 and it’s subsequent Oscar win for best Foreign movie, there has been a steady flow of what I like to call poetic/esoteric martial arts movies, none have them have been as successful as Crouching Tiger or resonated with audiences.

Although a huge martial arts fan (Check out the podcast we did about nouveau Martial Arts by clicking here) I prefer contemporary settings combined with less wirework heavy action. While I still like Jet Li, his name doesn’t make me run out to ticket counter anymore especially his best work is behind him, on top of that the name “Flying Swords of Dragon Gate” was just not sitting well with me as every time there is a mention of flying cutlery in Asian movies, I instantly switch off as I have a feeling the story will be too esoteric or set into cultural allegories too hard for non-Chinese audiences to grasps. And I’m not sure Flying Swords of Dragon’s Gate tackle either of those problems well enough.

So it was with slight trepidation that I entered the screening of the Flying Swords of Dragon’s Gate even though I still enjoy when a movie is well shot in 3D. Director Hark Tsui is working with a visual team that has some great credentials in terms of 3D work. And even though I’m not as well versed in Hark Tsui’s work, I have enjoyed Time and Tide (which I saw a life time ago) and some of his work with Jean Claude Van Damme, which wasn’t the worst from JCVD (which isn’t saying a lot, especially during that era)

Flying House of Dragon Gate (a reimagined sequel of 1992’s Dragon Inn) is the story of how China during the Ming Dynasty was under complete control of two factions of Eunuch bureaucrats; Eastern and Western bureau both seemingly corrupt. Jet Li plays a folk hero, Xhao Gwai On, who has vowed to take end both bureau’s, the movie starts as he just manages to eliminate the head of the Eastern Bureau (special appearance by Gordon Liu) in a sequence that really shows off the best of the 3D work as we see the camera fly through the shipyard and every possible tool found at a harbor flies at the audience, in some might say the most cheesy use of 3D. (Which in my mind is the fun way to do things in 3D)

So up next on his hit list is Yu Hua Tian (played by Kun Chen) head of the Western bureau who is desperately chasing a hand maiden who has been impregnated by the emperor, just as his men are about to kill her, Ling Lanqiu (Zhou Xun) steps in and escorts the hand maiden to the Dragon Gate inn, a sort of Shangri La den where a whole host of gangs end up finding shelter from a storm that comes every 60 years.

Since I hadn’t seen the first movie I was lost quite a few times at why this Inn was so important and who some of the key characters relationships where. Since there are plot itself is pretty much impossible to untangle, you end up just focusing on the action and the visuals.

The 3D is quite good especially in the landscape and aerial shots, it really made me want to visit these places if they do exist and aren’t CGI enhanced. The Action isn’t that great, but then again I loose interest when the martial arts is wire based and the characters are just flying everywhere on screen like Peter Pan.

The finale does have a fight in the eye of a Hurricane which has some great moments but that too fizzles out.

Performance wise, Jet Li appears and disappears randomly throughout the movie and usually looks like he has done this movie many many times already and has lost all vigor and passion for them. The standouts were Kun Chen and Zhou Xun, both actors I was seeing for the firs time but will definitely keep an eye out as they had great screen presence and delivered in the action sequences.

Unfortunately the meager positives aren’t enough to hold this movie together as it’s frankly too long. There is an entire plot of double crossing and treasure hunting that might have had more impact if I had seen the previous movie but as a stand alone Flying House of Dragon Gate doesn’t deliver.

Recommended only if you absolutely love Wuxia movies or are a massive Jet Li fan.

Flying House Of Dragon Gate is now available on DVD and Blu Ray.