Your Chance to Win 2 DVD’s of GBH 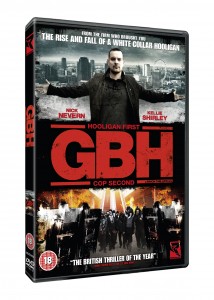 We’ll be reviewing the movie on Upodcast very soon and looking at the trailer, it looks Extremely British.

Award winning independent film company Revolver Entertainment releases the gritty crime thriller GBH on DVD from 1st October 2012. The film is a powerful, no-holds-barred British tale of criminality, morality, justice and vengeance set amidst the stark and violent backdrop of the 2011 London riots.

Before signing up to the police force he ran with a vicious football gang with a penchant for violence and intimidation. Now that Damien is on the other side of the law, he faces a tough decision – side with his old crew or protect London as it burns and rioters run amok?  Things are complicated further when he becomes romantically involved with fellow police officer Louise (Kellie Shirley, Eastenders), and is helpless to protect her when she is viciously beaten and raped by one of his former gang members. Damien decides to take matters into his own hands, with brutal and devastating consequences.

Billed as the British thriller film of the year, GBH packs a punch like no other and depicts the gritty realities of inner-city deprivation and social disillusionment, as a city is torn-apart and one man desperately fights for justice.

To celebrate the release of ‘GBH’ on DVD from 1st of October 2012, we are giving away 2 DVDs of the film. For your chance to win, simply answer the following question and send your replies to upodcasting@gmail.com:

Q.    Who plays the lead role of Damien in GBH?