Maniac Review: Battle of the Remakes 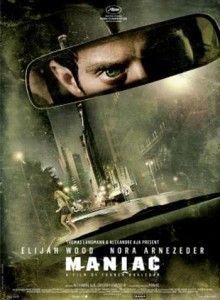 Here is a Battle of the Remakes review from our guest blogger Miss FooFantastic from FrightFest in London, she’ll be posting a couple of reviews here, so if you are a horror fan, keep your eye out for them.

Of the five movies that I watched at Frightfest the 13th, I’d have to say this one was my favourite. With a simple, straightforward story, and a very disturbed main character, director Franck Khalfoun leaves enough room for what matters in these type of movies: lots of gore, uneasy moments, and psycho creepiness.

Our Maniac is a man called Frank, who owns a mannequin shop left by his late mother. A strange fascination with women, mixed with terrorizing feelings of hatred, drives Frank to stalk and kill girls that catch his eye, and keep a souvenir of his victims. One day he meets photographer Anna, and a friendship develops, but this doesn’t stop Frank’s unusual obsession of collecting womens’ scalps.

The movie is a remake of William Lustig’s 1980s slasher ‘Maniac’, which I didn’t know at first. My initial plan was to watch the original movie before I would view the 2012 version, however in the end I had to do it the other way around. Didn’t make much of a difference eventually, since the 2012 version stays mostly true to the original storyline. The main difference is that the new movie is filmed from the killer’s point of view, so you see everything out of the Maniac’s eyes. You mainly get to see the Maniac himself when he looks in the mirror, is captured on photo etc.

While 1980s Frank is a big, sleazy-looking type played by Joe Spinell, 2012 Frank is very unthreatening looking and extremely shy in the form of Elijah Wood. I’m sure I’m not the only one that thought of Frodo Baggins when hearing Elijah Wood was playing the main character… but he played a great Maniac. What definitely did not draw me to this movie was seeing Elijah Wood’s name popping up, but he really did deliver this wonderful sense of awkwardness in how the Maniac interacts with women. 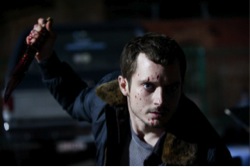 Both Maniacs are very emotionally disturbed, their view of women and love completely warped through their dysfunctional relationship with their mother. We see more about this relationship in the 2012 movie through flashbacks, and only hear about this indirectly in the 1980s. The Maniac’s love of collecting the scalps of his victims is obvious in both versions, and both movies surely make a point of showing this as graphically as possible. The amount of blood and gore in the two versions is fantastic (= a lot), and there are enough moments in both movies that will make you wince.

The victim situations are also fairly similar in both movies, although there are some tweaks in the 2012 version. For example, 2012 Frank apparently also uses online chatrooms to find his victims. Obviously 1980 Frank didn’t have this same luxury, and just goes out on the streets (which 2012 Frank does too, he just gets to enjoy more options in this digital age).

In both movies, the Maniacs meet photographer Anna, and this turns into an obsession. 1980s Maniac recognises his mother in this young lady, while 2012 Maniac mistakenly thinks he’s got a chance to be with Anna, only to find out she already has a boyfriend. Apart from these minor details and a few other differences, the overall development of the story is fairly similar. I guess it’s not a surprise that 2012 Anna gets the opportunity to have a bit more of a character than 1980s Anna, who gets the predictive role of ‘beautiful woman that reminds the Maniac of his mother’.

The 2012 version uses a 1980s inspired music score, which works nicely to recreate the typical 80s slasher atmosphere from the original movie. Talking about the music, a nice touch during a scene in the 2012 movie is the inclusion of ‘Goodbye horses’ by Q Lazarus, a.k.a. the Buffalo Bill song from The silence of the lambs. Other people might know it through the spoof done in Family Guy where Chris Griffin does this same dance. Needless to say this caused a few giggles in the audience, although it’s unknown which of the two references they were thinking of, most probably both (I hope!).

So the 2012 version of Maniac stays mainly true to its original, and unlike most remakes, it is actually really good. With some updates to make it more in line with the current times, it does not take away from the original story. 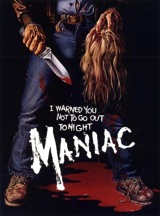 Old or New Maniac?: hmmmm….. the 1980s version did feel somewhat dated, although the sleaziness of 1980 Maniac did add a greater sense of grittiness to the movie which made it a bit more uncomfortable viewing than the remake. And that is exactly one of the things what makes a horror movie for me. However, seeing everything from the killer’s point of view in the remake really does add a nice effect to the movie, accentuating the Maniacs stalking behaviour, but also giving the audience a look into the head of this very disturbed man. Also, I prefer the choice of a more unassuming character to be a Maniac (it’s the quiet ones you always have to watch out for, isn’t it?). I’d have to give a slightly higher preference to the remake, although it is a very close call.

Watch this if: you enjoy the typical 80s slashers such as Friday the 13th, or you’re sceptical about whether Elijah Wood can actually play a maniac. There will always be the ‘original vs remake’ debate, but I personally think it’s worth watching if you liked the original.

Don’t watch this if: you’re the squeamish kinda type (well, that’s pretty obvious considering the main character collects scalps), or have strong feminist views: it’s still a remake of a typical slasher, so lots of helpless females that don’t have much chance to defend themselves before being brutally slaughtered.