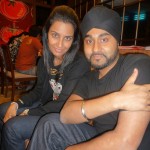 We usually don’t dabble in obituaries as it seems a bit tasteless but Kuly was such a nice guy we wanted to at least post this.

Here is the tribute track by Smooth featuring Nindy Kaur (his sister in law) and the attached press release:

International Urban-Bhangra artist Nindy Kaur will lend her soulful voice to a special song in memory of RDB’s Kuly Ral.

The moving song, titled ‘Tut Gaya Dil’, features the vocal talents of rising urban rap star Smooth, whose collaboration on Nindy’s track Aloo Chat saw him come to the attention of music moguls around the world. He was immediately signed to the RDB label Three Records Ltd to work on new material, with his debut being a feature on Nindy’s tribute track to Kuly.

The track has been written by Nindy, Smooth and Kuly’s father Harjog Singh, and is scheduled for release later this month through Three Records Ltd.

Nindy said of the project: “Not only did I lose my brother-in-law but a true friend, my biggest support and studio buddy. The atmosphere in the studio will never be same.

“I had to pour out my feelings to Dad (Harjog Singh) when writing my lines, and I must say Dad did an amazing job of writing those emotion filled lines. Smooth is like a brother and we’ve shared many good times with Kuly when making songs like Aloo Chaat. When he asked me to be part of this song there was no way I would ever refuse. Smooth defines talent and his lyrics throughout the track sum up everything we are going through”.

Billed as a ‘one to watch’ star for 2012, Nindy has successfully released her first two hit singles from her debut solo album, Nindypendent, which entered straight into the number one spot. Earlier this year, she came to the attention of mainstream music pundits with the release of Save The World, a fusion track of pure adrenaline dance coupled with Nindy’s trademark Punjabi kick, produced by the Canadian music group Culture Shock behind hits for Rihanna, Lady Gaga and Nicole Scherzinger.

Do check out the interview we did with him earlier by clicking here, I’m sure you will agree he was an all round awesome dude!