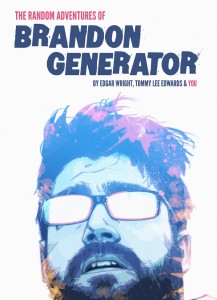 As you will have already seen from a couple of blog previous posts, Brandon Generator is easily the best collaborative project that Microsoft have worked on to inspire people to learn more about the latest web technology and the web in general. Not only for creatives but also the wider web audience, IE9 is a fantastic showcase for all that is good about browsing and the web experience.

to re-cap: Edgar Wright (Spaced, Sean of the Dead, Scott Pilgrim…) and Tommy Lee Edwards (Marvel illustrator extraordinaire – Turf, Batman…) worked on The Random Adventures of Brandon Generator, a story about far too much coffee consumption, writers block and an escape into fantasy.

Feeding us the story is the narration of Julian Barratt (mighty boosh, Nathan Barley…) with the soundtrack provided by David Holmes (this film’s crap let’s lash the seats, Ocean’s 11 etc soundtracks). After the first episode “aired” online, parts 2 – 4 were to be crowd-sourced and co-created by members of the public. Edgar and Tommy would take submitted ideas – written, voicemails and drawings – pull out the best/funniest and work them into the story for the coming episode. 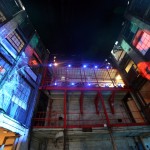 So, back to episode 4, the final installment. Upodcasting was kindly invited to a launch party for episode 4, at the suitably atmospheric Farmiloe Building in London’s Farringdon. Perfectly replicating Brandon’s apartment we were treated to a wonderful display of various storyboards and original artworks from the creative process; not to mention a vintage e-type Jaguar (that Brandon drives) and interactive displays about the making of and the episodes themselves. 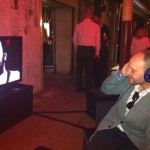 The highlight of the evening though, was of course the screening of the final episode. Thankfully the organisers saw sense, read my mind and played all 4 back to back for the first time. Introducing the part film-short, part animation, part graphic novel, part… was Mark Kermode, well known hater of 3D and respected film critic from the BBC. I have to admit I was very excited to see all 4 in sequence and I have to take my hat off to all concerned – what a fabulous project to have been involved in.

Following the show, we were treated to a Q&A with all 4 of the creative forces, who despite having worked on Brandon Generator since the beginning of the year, had never been in the same room together until Wednesday evening. I’ll share 2 of my highlights from the session – when asked what browser they all used, only Edgar Wright had the sense to say IE9, but that he couldn’t comment on versions 1 to 8. The others all looked a bit sheepish at this point I have to say! And also, because I think the guy is a genius, David Holmes, when they were all asked what they ate when working / creating responded with “well I smoke a lot of weed…so whatever I can get my hands on”. An audience effectively wet itself.

So, what of Brandon himself? Does he get out of his scrape and who is the mysterious Victoria Mews? You’ll have to find out by going here and ideally use IE9 to get the best from the experience – it’s worth installing just for this, it really is. Talking to Gabby Hegarty the IE manager for the UK, it was clear that this was one work project that no-one had a problem getting motivated for; a perfect chance for everyone to flex their creative muscles. Let’s hope that IE9 can bring that spirit to the rest of the web.

You can find episode 4 here and of course all 4 parts will be released as a whole very soon.