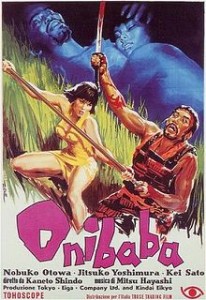 On a strong recommendation from a friend, I signed-up to watch this 1964 black and white Japanese movie. I didn’t know the director, the actors or the plot so this was the movie equivalent of a blind tasting. It’s a simple tale, set in 14th century Japan and based on a Buddhist parable.  A mother (Nobuko Otowa) and daughter in law (Jitsuko Yoshimura), live a detached existence, killing marooned samurai on their way through a vast reed-bed, in order to make a living by selling their armour and weapons to a local usury. But, for all its simplicity, Kaneto Shindo gives us a fable-like story interweaving lust, jealousy, fear, social-exclusion and death.

Set almost solely in amongst the reeds, the film becomes oppressive very quickly; the camera is rarely above the height of the reeds and with the constant sound of the wind rushing through the leaves. A nagging and sighing rustle and harsh whisper from which we really only escape when we see the characters in their hut haunts us throughout. This oppression is in turn reflected in the heat that becomes unbearable at night, making even sleep a difficult task. The sounds of the reeds is sometimes broken with music, but this is not a release as such; a jarring, gutteral burst of drums and percussion and screeching woodwind.

There is seemingly no escape; we will forever be held captive, a prisoner to the surroundings and inhuman way of life.

When a neighbour (Kei Sato) returns from war, telling of how the husband (and son) has died, so begins the breakdown of the relationship between the two women. One lusts and is lusted after, but the elder’s advances are spurned and the seeds of a bitter jealousy are sewn. As the sexual and social tension rises so this film shows us more gruesome and grotesque sides to human nature.

To reveal more will spoil the movie entirely, for it is certainly best seen first of all, with only a slight clue as to story and conclusion. An unusual film and although not horrific in terms of outright images – blood, guts, gore etc – is unsettling and strange. One for the curious and horror genre fans amongst us and ultimately very satisfying. I will be watching another Shindo horror – Kuroneko – later this month and will also post my thoughts.