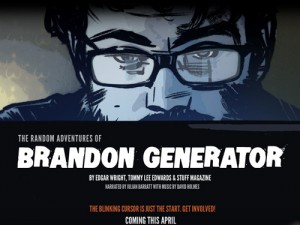 Yesterday evening between 6 and 7 UK time, Internet Explorer 9 hosted a Brandon Generator webchat. For those of us lucky enough to have been reading the random adventures of Brandon Generator it wasn’t just any old webchat, as creator Edgar Wright and illustraor Tommy Lee Edwards were there to answer our many varied questions!

Brandon Generator tells the story of Brandon and his struggles with writers block. Readers are asked to contribute ideas and stories that get incorporated into episodes and the project showcases all of IE7’s whistles and bells perfectly. Narrating the episodes is Julian Barratt of Mighty Boosh and Nathan Barley fame (whom Edgar has known since 1997) and the soundtrack is provided by David Holmes and his “Unloved” concept. What I didn’t know is that the pieces we hear are early edits that will be polished and then released as part of “Unloved” later this year.

The other surprise for me was that the timeline for what is such a beautifully produced project is very quick. Edgar and Tommy were in initial discussions as late as January with the fist full episode released in April. That said, both of them appear to be able to work at a crazy rate and have many things on the go at once. Edgar said he pretty much had the concept sorted within 24 hours of the kick-off. This might have something to do with Edgar’s addiction to coffee (note to Nespresso, he needs a new machine) and hence we know that Brandon is based on Edgar!

As for Brandon, well, he has one more episode left, due to appear in July and after that his fate is firmly in his readers hands. Despite both Tommy and Edgar enjoying working on this, there are no plans to take him to a larger screen, either TV or movie. That’s not to say we’ll see a Spaced Christmas special instead, because we won’t! The pace of Brandon Generator has been something both contributors enjoyed; seeing it as a welcome distraction from other things and affording the chance to focus on one character. The other thing that appealed was reader contribution and getting this into the stories. By all accounts there was a collective “Brandon consciousness” from those who submitted ideas, which just goes to show the power of great illustration, storyline and also voiceover. Somewhat randomly (or appropriately one could say), there were apparently attempts to get erotic storylines added and some people also submitted illustrations for this!

Just for the record, both Edgar and Tommy cannot wait to see Dark Knight Rises in a few weeks and their favourite films are Raising Arizona and Raiders of the Lost Ark respectively. And when Edgar was asked about working on Ant-Man, the response was a very coy “yes…and no”, so I guess we’ll have to wait for the outcome of that one.

Brandon can be found here and more about IE9 here

Have you been reading Brandon?  Let us know what you think!