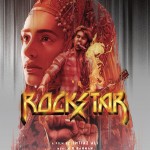 Coming to the close of a huge year in Box Office but maybe not in complete tune with my personal sensibilities I was pretty much sold on Rockstar from the outset just because of 2 names: Imtiaz Ali and AR Rahman. Imtiaz Ali has been quietly making romantic movies in a very fresh manner. When the trailer and especially Kun Faya Kun video was released I knew this would be hitting all my sweet spots.

A bittersweet love story (which I am going to talk about below in the spoiler section) set against the backdrop of the birth of a fictional Rockstar, from gangly Steve Urkel look-a-like Janardhan Jakhar to trendy bohemian bourgeois shalwar/pant-wearing stadium rocker. Although Rock On was a success and a movie I totally loved, London Dreams left such a skid mark in my cinematic briefs even if it starred one of my favorite actors that I was weary of Hindi Films taking on Rock again. (Ranbir prancing around with a guitar during the press tour really didn’t help either)

I was happy to see that there was less rock than the title suggests but the amount there is, is unfortunately not well handled. For anyone that has had the soundtrack on repeat (like me) would know that there really is only one song that could maybe be qualified as rock (although people that like to wear black T-shirts probably don’t agree with either) but it does bring us to the second element of the movie that had me sold and that is of musical wunderkind AR Rahman. Every soundtrack that the guy has ever produced is like crack to me. If I don’t get some new music at regular intervals I started hanging out with Bubbles in Hamsterdam or trying to steal some copper wire.

The movie is told in a nonlinear timeline starting with the final concert in Rome, flashing back to a young Jordan. This is quite refreshing although not unique for a Hindi film, it did however create quite a bit of confusion for the samosa auntie collective around me in the theater. Some of the emotional beats suffer a bit due the timeline but the movie weaves such a magic that it sticks so close to your heart that you yearn to revisit it as soon as you step out of the darkness of the cinema.

Rockstar is many things, but first and foremost it’s a musical epic composed around the soundtrack of Rahman.  Rockstar would not be possible without the sounds that have been on repeat on my iPod since the soundtrack was released a couple of months ago. From the chant-along stadium anthem Saada Haq, the hypnotism of the sufi inspired Kun Faaya Kun to the fun loving Katiya Karoon, there hasn’t been an album like this all year and truly only someone like AR Rahman’s midas touch could craft something that accompanied with the beautiful cinematography of Anil Mehta takes us to the soaring highs that we see Jordan gaze upon many times throughout the movie. A very smart move was to have one playback singer take on all of the songs that Jordan sings; it just creates more cohesion between Ranbir and Jordan which makes the character just that tad bit believable. And another thing I loved about the songs… there were no damn techno remixes of them on the album, thank Rahman.

Rockstar is a powerhouse performance by Ranbir Kapoor, although the young actor has been known to have the luxury to experiment unlike his contemporaries, he has an innate and effortless talent that can’t be denied.  We have seen him as a slacker in Wake Up Sid, a college graduate transformed into a political strategist in Raajneeti but the performance here is just something different. Although Jordan is pretty much a petulant man child (isn’t that what Rockstar are supposed to be?) Ranbir makes you feel his anger, his frustration, his ambition and his love for Heer.

Played by newcomer and former Whose Americas Top Model ( I dont know the exact name of that show) contestant Nargis Fakhri, the character of Heer teeters on the manic pixie dream girl, a character template coined by film Critic Nathan Rabin.  Man-children protagonists usually fall in love with MPDG but Heer is more of a driver of the relationship than the label usually offers us. The decision to dub Nargis’ voice creates a disconnect doesn’t help making the performance more stilted, a decision I never understand but then again I am a sucker for all types of accents.  And who knows if it’s something that even Rani Mukherjee and Katrina Kaif struggled with at the start of their careers maybe we can see more of Nargis soon, I definitely wouldn’t mind seeing more of her. (I totally also dig that little scar she has under her nose)

And maybe Heer is a MPDG in the way Paro was in Devdas or Kiran was in Darr but Nargis’ fresh appearance is so charming that you just want to chill out with her and have fun like Janardhan does before he becomes Jordan.

Her backstory is treated with nuance and hints (her marriage and her decisions in Prague) which are very subtle but make us understand why we as audience members fall in love with her. She is clearly playing that girl in high school that every guy has met, the one every guy and approximately 10-15% of girls are crazy about in college, that teenagers dream about after class and since she is engaged to be married that just adds to her allure.

Rockstar is a passionate love story of the kind we haven’t seen in a while and earlier this year Mausam probably tried to deliver. Director Imtiaz Ali has steadily worked throughout his previous movies trying to understand the foibles of young love within the conventions of Bollywood. Some might say he is getting stuck in the same mold but he manages to do so by giving us a new perspective on stories we know and some of us love. This is the case with Rockstar too, we know where the story will take us and where it will end but the ride is just so fresh that you forgive most of the faults.

There are some issues with the movie though, the second half of the movie starts dragging and the writing of the characters becomes a bit unbelievable especially in the female characters, like Heer’s sister, her sister in law and mother. ? Maybe the writer in Imtiaz Ali is only able to handle one female character to halfbakedly flesh out?

I also would have liked to see more of the journey of Jordan, suddenly he seems to be rocking stadiums and kicking journalists and we never have a sense on how that is justified. It would have been great to see him struggle more with the music industry (which we hear clearly in Sheher Mein on the soundtrack than in the movie itself). It reminded me of those scenes in 8 Mile where we see Eminem writing lyrics on the palm of his hand as he’s just working on this music all the time. This sense of creativity was lacking in Jordan. But this is probably due to the decision to focus on the love story.

Most of all Rockstar is a movie of achieving all your dreams but the price it comes at can be very high.

Spoiler Section: (if you want a non spoiler- non desi review, you should check out the review I did for HeyUGuys posting very soon)