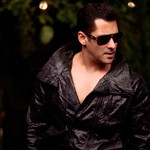 Indian stars command a different level obsession than their western counterparts. The love and adulation we feel for “our favorites” combines the passion for a sportsteam with the myth of a rock star. We tailor our personal style, conversational idioms and day to day jokes towards them and every generation (even if they won’t admit it) has that one star that just sends them into a frenzy. My parents had Dilip Kumar, growing up we had Amitabh Bachchan but from adolescence there was only one name for me and that was Salman Khan.

The release of his Bodyguard is just around the corner (31st of August) and we had a podcast planned with him but then got diagnosed with trigeminal neuralgia, a very painful nerve disorder for which he had to fly out for treatment for the US. But Salman Khan “ne ek bar jo commitment kardi, toh phir woh apni bhi nahi sunta” (once he makes a commitment, then he doesnt even listen to himself) and  he took to answer some of our questions via email  just before he flew out. And truth be told, I don’t know if I could have contained my excitement if I had gotten a chance to speak with him. (Clearly Upodcast is a place for fans more than journalistic professionalism)

Sabka hai Ek Bhaijaan, here is the one and only Salman Khan in his inimitable style answering questions from yours truly.

Sorry to hear about your ailment through the news. I hope you are well
and that it doesn’t hurt too much? How were you able to cope with it
through shooting?

Ya, did get unbearable at times… I had planned to get myself treated
after the shoot, post productions and promotions for Bodyguard are
completed. But now pain has become unbearable.

You have had a time honored equation with music over the years? Is
that just luck or do you have a musical ear? Did you sit down with the
music directors of Bodyguard and discuss what was needed?

Na I have been lucky… my music directors do a good job.

I have been lucky enough to have all the talented music directors
composing music for the songs that I dance to on screen. I had given
certain inputs in the song ‘Teri Meri’ but it was entirely Himesh’s
creative efforts that the song a creating a buzz among people.

Desi beat has a slight tinge (maybe a sample) of “Kabooter Ja Ja” from
Maine Pyar Kiya. Do you reminisce about some of your earlier roles? Do
you rewatch any of your older movies?

All I can say Desi Beats is a big success in India and overseas. I do
recall my roles at times as I did them because I liked the role but
now I am always looking forward to do something new and exciting.

Did you bring any of those sensibilities from older movies to
Bodyguard? Is there a Jaagruti -style jungle
training scene?

Bodyguard is a very different film. I think it is an innocent love
story. It is a good balance of emotions, romance action and drama. As
far as action in the film is concerned the entire credit goes to
Vijayan Master. He directed my wanted and dabbang and wanted to push
limits with this one too.

What were the roles you think you nailed but maybe didn’t work with
audiences as well? How do you deal with a movie when it doesn’t work?

Yes, film is to be approached with new enthusiasm and more motivation.
If the film turns a blockbuster it’s great and if it doesn’t you have
to move on. The number of people watching your film is directly
proportional to how good the film is. The intension is always to make
a good movie and positive responses definitely make me feel good.

Are there times whilst shooting that you know it’s not going well? And
if so is there sometimes you pull back?

There are hardships everywhere. Facing the obstacles is the only way
to overcome them. If things don’t go well at times you just have to
work your way around it rather than pulling back.

You have been doing action movies since the start of your career but
now since Wanted it had taken another level. What has changed in your
mind?

Wanted has certainly added a lot to my performance and enhanced my connect with the viewers. But every role brings something new to me intensifies my ability to act.

Is it the effect of your TV presence that you have created a closer
bond with your audience?

Television is definitely a vibrant medium and reaches to masses far
and wide. It has been a platform to reach the audience who probably
miss out on catching me on the larger screen.

From Baaghi to Veer and of course your much respected
father (Salim Khan), writing has been a part of your life. You have taken on
painting since a few years too. Do you feel that these are ways you
communicate with your fans and audience or is it more of an internal
process where you deal with your own thoughts?

Just as everyone develops certain interests at different points in
their lives I am drawn towards painting. I am interested in painting
as it is an art form that helps me to express myself.

What type of creative input did you have in Bodyguard as the
production team is family?

My first responsibility is with my audience then it is to producer.
Who is the producer is not important. Atul (Agnihotri, producer and Salman’s brother in law-ed) came with this script
before the Malayalam bodyguard was made. And we had decided to make it
in Hindi whatever may be the faith of Malayalam.

You started the trend of South indian remakes with Tere Naam. What do
you think needs to be adjusted or tweaked when remaking a South Indian
movie to North Indian audiences?

I have loved the subjects of all the remakes I have done so far. Tere
Naam and Wanted fetched quite good results this only indicates
audiences liked the concept and the films at large. I believe it is
entirely the film maker’s call. Bodyguard which is a remake of the
Malayalam version had drastic changes in the characterization and
these were Siddique’s efforts to bring the film in a fresh form to
Bollywood’s audiences.

Are there any South Indian stars or movies you are particularly fond of? 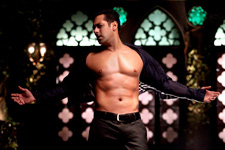 Rajnikanth with out doubt…

Would you ever consider making a work-out dvd for all your fans that
want to be buff like you?

Have not thought about it…

So I hope you enjoyed reading some of his answers. For more BodyGuard goodness you can check out our Podcast interview with Kareena Kapoor, his co-star.

Or of course catch Bodyguard in theatres in a couple of days in a theater near you!

Let us know what  you thought of Bodyguard after the jump!

And thanks to our good friend Amaluu from Bollystalgia, a fellow Sallu fan who helped us out with some of the questions!
You can follow us on twitter or Facebook by clicking links on the left!
EID MUBARAK!
@asimburney
Tags:Amitabh BachchanBodyguardDilip KumarInterviewMaine Pyar KiyaMalayalamSalim KhanSalman KhanTere Naam