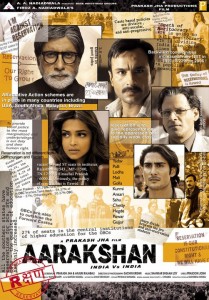 After the unexpected box office success of last year’s Raajneeti, a political drama with a huge star cast taking influences from Indian Mythology and the Francis Ford Coppola’s Godfather, director and auteur Prakash Jha is back with his intense brand of cinema with Aarakshan (Reservation) starring Amitabh Bachchan, Saif Ali Khan, Manoj Bajpai and Deepika Padukone. This time he tackles the issue of reservation, the practice of setting jobs and positions aside for certain social classes who were left behind as a remnant of the old Indian Caste based society, a bit like affirmative action but not entirely. So is Prakash Jha able to entertain and educate us? Does the chemistry of Deepika and Saif Ali Khan work wonders again after Love Aaj Kal? Check out our review after the jump!

Amitabh Bachchan plays Prabhakar Anand the Principal of a top college dealing with the repercussions of policies set in place for reservation of seats for minority students that strains relationships on his campus between students as well as faculty. His daughter Poorbi (Deepika Padukone, very well-coiffed) is going out with junior faculty member Deepak Kumar (Saif Ali Khan, seriously coiffed) who is a dalit (lower caste member) who regularly clashes head with Vice Principal Mithilesh Singh (Manoj Bajpai, in a crazy hair piece) who is from an unnamed caste but seems to hate everyone else’s. Oh, and Prateik Babbar also randomly pops in and out of the movie as Sushant Singh a very angry and monotonous sounding amalgam of characters.

Aarakshan is a movie with a good heart that wants to convey a message that it feels is important but then loses its train of thought somewhere around interval. The miscasting of characters and inconsistent screenplay doesn’t help and the movie never rises above the sum of its parts.  It doesn’t set the ground work and pussyfoots around the issue of reservation without taking a firm position, the only way we can figure out which side is good and which is evil, is the actors portraying the sides of the debate. The pretty ones are good and hence in support of reservation, the less pretty ones aren’t. Some pretty actors are confused but you know that’s just the folly of youth. Aarakshan only meanderingly reaches the interval point and the stakes are never that high up until then. (Amitabh resigns for a post he’s been on for 35 years, maybe a good time for a career change)

The 2nd half of the movie doesn’t have the balls to offer a viable solution to any of the issues raised in the first half, so side tracks everything set up about reservation and becomes paint by number man against the system movie. It just drags on from one haphazard sequence to the other and ends up in a melodramatic and sometimes comical mess resolving everything through deux ex machina of a special appearance of a veteran actress who seems to wield some sort of superpower over politicians and the police but it is never really explained what she is or what she can do and if she really is Wonder Woman, how come she didn’t step in earlier? (If they were casting an Indian Wonder Woman in the 70’s, she would totally rock own that role)

The screenplay is shifty, we never get an idea of the any of the character as they aren’t really developed individuals, and there’s no real interconnection between them any of them. They don’t seen convincing as friends; lovers yet appear randomly and have a change of heart or career at the skip of a beat without any understanding of their motivation. They only stand for ideas or points of views the writer wants to deliver fiery speeches through.

Aside from that there is a huge age gap between the actors just makes it all very confusing. (Which I have started calling The Green Lantern syndrome)

Getting to the performances, Prateik needs to start working on his dialogue delivery, pronto. Every line he pronounces ends in the same high pitched squeal that gets grating after a while. He suffered from the same problem previously in Dum Maaro Dum. But still something about the youngster is engrossing and his potential just oozes off screen.

Deepika is supposed to be a love interest, a biology teacher, a student, a rebellious teenager (the “I hate my life” outburst had the audience giggling) and community 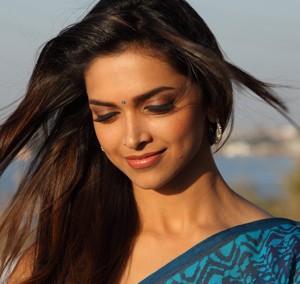 leader, unfortunately she isn’t capable to pull off any of those roles. Her hair is very bouncy though and she seems to cry a lot when she breaks up with her boyfriend or arches her perfect threaded eyebrows when angry. Unlike Love Aaj Kal, there is no chemistry at all between her and Saif Ali Khan. Also aren’t we a bit tired of seeing female characters cry themselves in a pillow after breaking up with their boyfriend?

Manoj Bajpai is cartoonish most of the times and goes bat shit insance at the end. And why is Prakash Jha hell bent on giving him over the top 1980’s “Subhash Ghai”- villain get ups in every movie he casts him in. He is such a good actor but shackled by a one note character arc instead of a worthy opponent against any of the protagonists. ( Deepika is a student without support in his college when Amitabh is fired but he does nothing with it?)

Saif Ali Khan is passable and brimming with best of intentions but his character again is just so badly written, he is supposed to be a professor but doesn’t seem too smart. After starting fights with faculty, breaking up with his girl for juvenile reasons, he moves to the US only to come back to end up in jail. His motivations just seem slapdash to move the plot along without ever really feeling like a real person, which is a shame as the actor does try hard. He succeeds in the showdown scenes between him and Manoj Bajpai and his dialogues delivery is scorching. 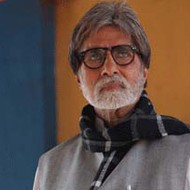 Amitabh is amazing as awesome but it’s a role he could sleepwalk through now and poses no real challenge. People that complained about his previous release (Bbuddah Hoga Tera Baap- click here for our special podcast), that he should play his age (a ridiculous notion which deserves a drop kick) should be happy now as the knitted sweater vest is back. I had to honestly re-adjust seeing him back into the role an old patriarch role after kicking some major ass in Bbudah Hoga tera Baap. There is a scene between him and Deepika which is touching and shows what an actor of his caliber can bring by just a simple act like setting the table for dinner.

But I do wonder what this movie would have been if Nasseerudin Shah had been cast instead. Not just for the fact that Amitabh has been doing these roles quite often and seems the convenient pick for casting directors but also because of the brief appearances Nasseer made in Zindagi Na Milegi Dobara and Raajneeti really makes me miss the actor. It would have also added some zing to the Aarakshan which it sorely needs.

The movie seems to struggle between being a thought provoking issue based drama about reservation and a crowd pleasing clap-a-long.  A balance that director Prakash jha was able to strike quite well in Rajneeti but fails to do so in Aarakshan. Maybe it’s the theme itself of segregation and reservation isn’t one that is as black or white as politics and requires a more balanced approach.

The songs are boring except “Acha Lagta Hai”, which is shot quite beautifully but I guess that’s why Deepika Padukone gets roped in for these roles.

Movie has been mired by controversy and has even been banned in certain regions. I don’t have the context or the knowledge to debate the issues people are up in arms about, I can only judge Aarakshan from a cinematic perspective but I do feel that this is still not a great movie and if you want to see better work from Prakash Jha, you can always grab Raajneeti or GangaaJal instead.

One more thing though, everyone wears a lot of scarves.

Let us know what you thought of Aarakshan in the comment section below!