Bajirao Singham is an honest cop and darling of a small town, Shivgad, where his daddy is a rich merchant and crime seems to be very low as he keeps paying off every crime anyone does, maybe not the best of crime fighting techniques. Singham also helps out villagers with road side assistance when their carts get stuck in the mud and helps crippled kids win school races (what type of school would put a crippled kid in a race, is a question best not asked), while all the time wearing Aviators and having the cleanest police uniform in the history of Ariel. Before spending the first half of the movie romancing Kaavya (Kaajal Aggarwal known from the bonkers Magadheera making her Hindi Film Debut), he comes face to face with Jaikant Shikre(Prakash Raj), the usual thug/politician villain and part time comedian in a pretty awesomely shot pre-intermission scene in his local village. Not able to take the insult to his ego, Shikre pulls some strings to get Singham transferred to Goa, a city under his thumb. He “tortures” Singham by prank calls and having his henchmen play “doorbell ditch” which forces our eponymous hero to take his shirt off and unleash the lion within him. The Indian Police uniform has lions on it, so there are metaphors on kung fu wires in this movie as much as there are cars and goons flying around.

Although I have laid down the plot in quite a few details, it’s a story we know and can’t be spoilt. This movie in my mind is truly critic proof. You can point out problems with it but at the end of the day it does win you over. You rejoice when the hero thrashes the bad guy and clap when he roars his punchy dialogues against the villain. Taking box office out of the equation, a movie is effective when it succeeds in its intention and Singham truly does that. The best comparison I can make is actually the Transformers ( of which we reviewed part 3 on episode 30 of our podcast) series. Like Michael Bay, Rohit Shetty has an unbelievable eye for action and quite the visual flair but his comedic sensibilities and handling of the romantic track is low brow and juvenile.  (And sometimes you do wonder if it’s written by this guy)

Director and longtime collaborator, Rohit Shetty (who also designed most of the action) uses a hell of a lot of wire work in his set pieces and most of it is truly heart pounding but he tends to go overboard quite a few times where cars and people are just flying around with no weight or consequence. There are moments where you just stop caring the third time Bajirao takes off his belt to whip villains. I admit, the first 2 times were awesome, the third even the villain seems bored and just talks through it.

I have never found wire work to be effectively done in Hindi Films ( I hold my heart for RA.One), it works when used as a punch line to action but not when the entirety of the action is built upon it. Unfortnately Rohit Shetty has a propensity for overusing it as demonstrated in pretty much every movie he has ever done as a director (Sunday, All The Best, Golmaal series) there are moments that it feels like a 5 year old bashing action figures against each other.  Some scenes are bizarre choices that take you out of the movie especially the night sequences which are shot with green screen and a filter, and everything just seems brightly pastel colored which give the movie a fresh look but for tires my eyes after a while. I do see Rohit turning to 3D, I think he would be very effective.  There are some underlying religious and nationalistic themes to the movie too which felt a bit heavy handed. (There’s that Michael Bay comparison again was…). I did really enjoy how hands on Rohit is in designing the action sequences as we see in the post credit sequence and he genuinely seems like a cool guy to hang out with unlike Bay who just seems like an twat.

Performance wise Ajay “Jazz hands” Devgan(I haven’t kept up with the latest version of the spelling of his name using numerology) in the titular role is amazing! One of the most consistent actors in the Hindi film industry (even more so than the Khans) he is back in an action packed role sans 90’s hair but mixed in with the comedic flair he has developed lately mostly by working with Rohit Shetty. The first half of the movie is full of comedy which is  completely subjective if it works for you or not.  Comedic sidekicks or villagers running away scared by a plastic mask are just not my thing but Ajay even performs well in those scenes. But he really comes into his own facing off with Prakash Raj or bashing goons and even in our screening the audience was close to clapping and whistling.

Kaajal Agarwal has a very perky appearance but unfortunately her character of Kaavya is the most vanilla of Hindi film love interests. She’s the annoying prankster in the first half and the motivator in the second. Even though Kaajal does well, I was groaning every time she would appear in the second half as I just did not want to get back to the corniness of the first. Someone does need to fire the wardrobe department as she’s wearing the same suit in a multitude of colors throughout the movie.

Prakash Raj has been playing the same bad guy in Wanted and Bbhuddah Hoga Tera Baap ( check out our special podcast) but he’s just so good at it, that I just love seeing him on screen. This time he gets a lot more screen time and amazing lines. And the balance he strikes between comedy and straight up menace even overshadows Ajay in some scenes.  The Shikre vs Singham dialogue showdowns are truly the best part of the picture and are so well paced from the pre-intermission on wards that you are fully on board with the pace of the movie.  Both actors get the chance to get the upper hand in sequences and especially Ajay Devgan is really great in underplaying when he needs to let Prakash’s charisma as a villain shine on screen.

The songs in Singham on the other hand are unforgiveably bad and even are shot uninspiringly.

Although I find the drums in the title song very rhythmic, the song works better as a background score then a fully-fledged play back song . However cool the Jazz hands are, the belt buckle shake from Dabanng trumps it. The other songs are completely forgettable and honestly I have forgotten them already… I just know they had Kaajal Agarwal and Ajay Devgan in them and they were dancing or riding a bike or something else romantic… 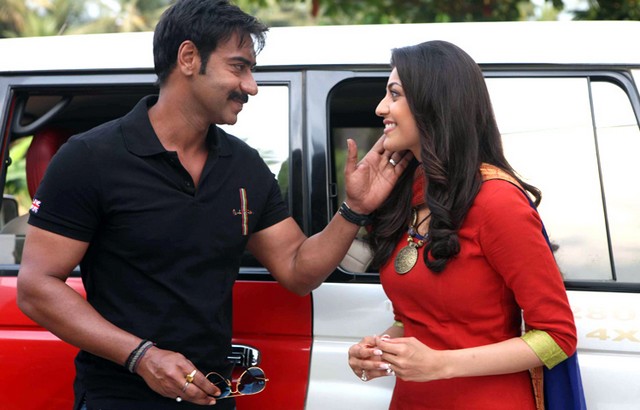 All in all Singham is straight up masala flick, nothing meta about it, no subversion of the genre like Dabanng was to certain extent. You need to watch this movie with your heart and whenever your brain starts thinking again, just wrestle it back to the ground or look at the pretty colors and carflipping or munch on some popcorn. Singham succeeds in what it sets out to do and if you want to have a good family friendly time (the action is completely bloodless) and some old school hero-giri, then it’s a total recommend.

I know Ganesh Acharya is not the most svelte of choreographers, but does he ever invent any dance steps that move more than 1 body part simultaneously?

The whole officer Kadam suicide track which serves as a catalyst just pops up and out when needed and his kid that’s supposed to play “the conscience” of the police force has the most morose face ever. Who in the production team is he related to?

Sonali Kulkarni is a joy to watch on screen and I’m glad to see her again, I can’t believe she is already relegated to aunty roles.

I had some real issues with the climax of the movie. I just don’t agree with police brutality and I feel it felt out of character for a straight laced, honest cop to out and out assassinate the villains. And you could totally flip around the roles and make the cop the villain and the hero the goon taking on a corrupt police force.

This movie is the bizarro version of Ajay Devgan’s “Gangaajal” directed by Prakash Jha, there is even a villain whipping scene which I felt was much more effective than the ones in Singham.

If you have watched the ManMohan Singham version on YouTube, you will be thinking about it and giggling during those scenes.

Let us know what you thought of Singham in the comment section below. Also, this is a remake of a South Indian film , I haven’t watched it yet so let us know what the differences or improvements are?