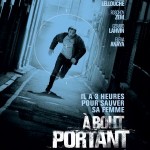 I have no idea why the producers of A Bout Portant chose to give this French thriller, directed by Fred Cavaye and starring Giles Lelouche, Gerard Lanvin and Roschdy Zem, the same name as the classic John Boorman– Lee Marvin 1967 film noir but there must be some marketing genius that got a promotion out of it, so who am I to complain about it.

We start off with a very impressive bike crash (the opposite of Meet Joe Black’s car accident) in the tunnels of Paris where a wounded man, bank robber Hugo Sartet (Roschdy Zem), is brought into the ward of Samuel Pierret (Gilles Lelouche) a nurse in training with a lovely 7.5 month pregnant Spanish wife Nadia (played by Elena Anaya known from Sex and Lucia , Mesrine and Van Helsing) . After rescuing the wounded man from an assassination attempt and in the midst of bragging about it in the morning, he is knocked out and his wife is kidnapped. When he wakes up by the sound a ringing cell phone he hears a crying Nadia and a simple message: Bring the man you saved to us and your wife will be returned to you.

From the outset the stakes are set unbelievably high, just having a pregnant women crying in a cold storage room gives viewers the Heebie-jeebies and the movies pace is relentless with some a very cold and realistic cinematography. Although not related but after seeing last year’s “Ne le Dit a Personne” (Tell No One, soon to be remade by Ben Affleck… and there was much rejoicing) these kind of pulpy French thrillers have definitely been on my radar.

Where Gilles Lelouche had a small but pivotal role in “Tell No One” where he was playing a gangster/ hustler, here he plays just an everyman that bleeds, cries and pukes. He really sells you on the sense of desperation straight from the kidnapping scene. It’s the complete opposite of the cell phone scene with Liam Neeson in Taken. Where that scene left the audience fist bumping “Fuck Yeah”, here Gilles really sells us his helplessness but also his resolve to do anything to find his wife.

The performances by all the cast are great and I have to give a special mention to Elena Anaya who just has the cutest accent when speaking French, maybe something non-native speakers won’t catch but I am sure her performance will win you over and feel protective of her.

I am trying to be careful of spoilers but knowing French cinema conventions and general disdain for the police force, you can pretty much figure out the twist and turns but the action is so fast paced that you are fully engaged with the movies. Director Fred Cavayé‘s approach has a good balance of familiar thriller tropes combined with that Gaelic “I don’t know what” and like his previous movie Pour Elle which was remade by Paul Haggis with Russel Crowe and Elizabeth Banks, A Bout Portant is ready to be remade by Hollywood too, I hope it does get a better treatment at the box office then “The Next Three Days” did (as it was a pretty good movie that was completely neglected by general audiences).

Nothing ground breaking but if you are in the mood for a decent thriller you can definitely not go wrong with A Bout Portant.

A Bout Portant is now out on Blu Ray and DVD in France.