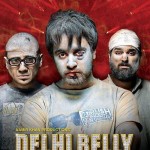 Delhi Belly is the long in the making black comedy produced
by the illustrious Amir Khan Productions, a banner that is constantly on the
threshold of that very coveted first potential Indian cross-over that gives Hindi
cinema the acceptance and credibility by International audiences that it almost
tasted with the 2001 Oscar nomination of Amir Khan’s very own period cricket
saga Lagaan (and then Danny Boyle took away it’s thunder with Slumdog
Millionaire). Former Ad maker Abhinay Deo‘s shows a hell of a lot of visual
flair, as he did in his previous release Game (a slick who-dunnit that Upodcast
enjoyed but was universally panned by critics and rejected by the box office),
taking us on a wild and thoroughly unhygienic ride through the mean street of
Delhi via diamond scams, dubious broast chicken, orange juice lota’s and halfhearted
cunnilingus interrupted by a Paris Hilton style inability to switch off the
phone.

The story of Delhi Belly is off three ironic T-shirt wearing
slacker types (Imran Khan- Tashi the jounalist, Vir Das– Arup the cartoonist
and Kunal Roy Kapoor- Nitin the perverted photographer) who live together in a
dirty ass apartment with bad plumbing, noisy classical-dancing (I won’t try to
guess if it’s Khatak or something else, just take it from me it’s classical as
the teacher is kinda effeminate) upstairs neighbors and a meek prostitute
visiting landlord. Tashi’s airhostess girlfriend played by Shehnaz Treasurywala
(a pleasant appearance after a very long hiatus- I didn’t bother with Himesh
Reshammiya ‘s Radio) asks him to deliver a package, containing a Russian doll
with diamonds, for some shady Russian types. Through a series of confusions, as
is the case with such crime capers, the packet gets exchanged with Kunal Roy
Kapur’s stool sample that’s off to the doctors lab as after he’s eating some
very dubious looking chicken and is suffering from the titular “Delhi Belly”. The
delivery was expected by wise cracking foulmouthed and pretty menacing Vijay
Raaz playing the crime boss. After a firecracker sodomy torture scene (reminiscent
of Dum Maaro Dum’s chili pepper pistol scene) the pressure is on our reluctant
heroes to retrieve the diamonds. There is a lot of running around, quippy
dialogue, snappy editing, a blaring background score, taking you on a wild journey
that all ties up at the end. 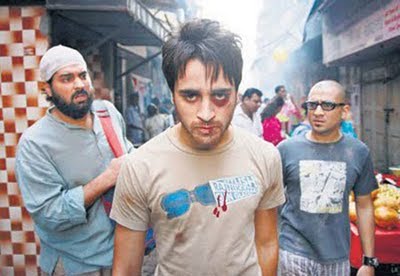 The problem is that the ride takes a pretty long time to get
going and before it does Delhi Belly tries so hard distancing itself from the
usual Bollywood tropes and clichés that it starts to revel in its own ugliness,
demanding a lot of audience. We see butt cracks, diarrhea spread out over
velvet and a cacophony of poop noises that after a while just ends up being
stomach churning. The comedic beats in the first half are very erratic relying
heavily in the ability of the scriptwriters to pack as many swear words as
possible. And boy there are a lot of swear words and although the movie is
mostly English spoken, it’s the Hindi dialogues that really work especially
when delivered by Vir Das or Vijay Raaz. The English ones just don’t seem to
sound right. Maybe not all the cast is used to delivering English dialogues and
sometimes the cadence is just a bit off making it lack verbal panache. But
Delhi Belly kicks and screams like a petulant child trying to break free by the
shackles of its expectations and even though it stumbles along the way to before
finding its footing in the second half, the overall the product is very
enjoyable.

Arup’s romantic and professional woes really slow down the
first half of the movie and serve no real purpose to the overall story line.
They also seem to pop and drop randomly. The banana joke, Ja Chudail and Disco
Fighter are funny as hell though helped by Vir’s comedic timing( probably honed
by his years of Stand up Comedy), the girlfriend break up scenes were unnecessary
except to make him get rid of that terrible haircut which we can all applaud. It
also further feeds into Bollywood’s newfound Elvis Jumpsuit obsession.

Kunal Roy is hilarious as the perverted and easy going
photographer playing the equivalent of the Zach Galafanakis role from the
Hangover, Melissa McCarthy in the recent Bridemaids or even taking us all the
way back to Jim Belushi in Animal Farm. In other words he’s playing the
overweight comedic catalyst to the plot. He does have a moment of emotional
redemption at the end which is sweetly played. In my mind he’s a performer than
his younger brother Aditya Roy Kapoor and has much better hair.

Imran’s Tashi as the lead is a tough call, clearly still
very fresh as a performer when this was shot (and you can see it in quite a few
sequences although Imran disagrees when we spoke during our Podcast). Dellhi Belly
is supposed to be Tashi’s hero’s journey but you don’t really understand the romantic
malaise he feels with his fiancée Shehnaz Treasurywala nor do you really root
for his no-nonsense chemistry with Poorna Jagannathan (making her debut in
Bollywood). Somewhere you want him to stand up and just become a man but at the
point it happens you’ve stopped caring for any of his three story treads. Maybe
it’s just the remnant of  Wake Up Sid/Break
ke Baad  slacker types from a couple of
years ago that just don’t want to take a stand in life until the climax of the
movie and audiences (and me!) have gotten annoyed with and latched on to more
testosterone driven masala hero roles like Wanted, Dabanng, Dum Maaro Dum and
soon Singham; But the guy definetly deserves respect for taking such bold choices at the start of his career. Clearly although he has found box office acceptance in romantic roles but the actor in him does want to experiment and do something different which is something that needs to be applauded and in my book puts him above the cookie cutter roles that his competitors take on.

As soon as the gangsters come into the fold, and this
happens quite quickly, the movie finally really picks up the pace and Delhi Belly
starts delivering consistent laughs. The visual style and the awesome
soundtrack that has been rocking my iPod since the first teaser trailer starts
kicking in and as an audience member (and I feel the movie makers) have a
better sense of where we’re going. A lot of Hindi movie fans have an
uncomfortable position towards the Danny Boyle Feel Good Oscar monger of 2008 Slumdog
Millionaire, feeling a lack of ownership towards but it being billboard or
entry point for “outsiders”. (If I only had a nickel for everyone that’s told
me they loved Slumdog Millionaire when conversations veer towards Bollywood). Delhi
Belly tries to cater to the same Metroplex/ International film smug geek audience
but instead of subverting Bollywood tropes as Slumdog Millionaire did it does
so with Danny Boyle’s own Trainspotting mixed with a heavy dose of Tarantino
and Guy Ritchie. A tactic that might backfire as this is exactly the audience
that is very familiar of this type of storytelling and doesn’t mind spouting
their half assed “IT’S A COPY, YAAR”-comments on every possible social media. A
point very eloquently written up on Rajasen Blog which you should definitely read
if you are one of those guys.

Releasing on the same day in India as Amitabh Bachchan’s
return to his angry young man template created in the 70’s gotten in Buddha
Tera Baap, a movie probably ingrained in Bollywood conventions and meta-references.
And although these movies have nothing to do with each other (except releasing on
the same day) and cater to completely different audiences, people will be
caught up in pitching box office returns against each other. Delhi Belly carves
its own path making no qualms of its influences i.e. Snatch and Lock, Stock and
Two Smoking barrels but to me it’s closer to 2002 Brazilian “Cidade de Deus” (City
of Gods) where director Fernando Mireilles managed to transport the Brit
Gangster/Tarantino tropes to the Favelas of Brazil. Delhi Belly does the same
and it does it quite successfully rising above its influences and adding that
desi tharka (seasoning) that adds all the flavor to Indian homegrown dishes but
comes with the risk of giving us the runs.

Sometimes Bollywwod needs a kick in the nuts or in this case a firecrackers up it’s ass! Delhi belly is just that wake up call!

Other Things I really liked

Let us know what you thought of Delhi
Belly and our review in the comment section below!