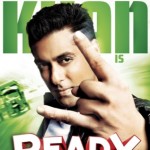 The promos have been playing night and day. The pocket pointy dance has become a fad. The public has been waiting for a time pass masala entertainer since January. Salman Khan is riding high after Dabanng and Wanted. Aneez Bazmee is at an all-time low after Thank You and No Problem. No one can even remember the last time Tips, the production company, behind Ready had a bona fide hit. So how does Ready stack up with all these expectations? Check out our review after the jump!

Before I start talking about the movie I have to mention that there are a ton of sponsorship deals, thank you’s and corporate tie-ins that appear before the movie starts.

A special mention to Rahul Rawail Grandson’s logo which is a straight lift from Disney’s The Lion King. It’s probably the first time I actually wanted Disney to sue someone.

But I was hungry to be entertained and more than anything I wanted this movie to work.

Having seen Dum Maaro Dum and Game, both movies I really enjoyed but didn’t tickle my masala craving, I walked in with my pot of strawberry flavored yoghurt into the theatre. I have always made my fondness for Salman Khan clear in even his most dreary outings. Everyone can love the man in Dabanng but loving him in God Tussi Great Ho demands a certain kind of insanity and adulation.

Asin is always a pleasant appearance on the big screen in the few movies I have seen her in and I felt the chemistry she had with Salman in London Dreams was probably the best part of that horror fest.

But I had no faith in director Anees Bazmee whatsoever as I have never enjoyed any of his movies. I don’t like his brand of humor and above all I question his mindset.

To me he seems like lecherous old man cracking inappropriate jokes that gets invited to your house party. You can humor him for a couple of minutes but after that you can or drop kick him out your house or walk away. It’s always a surprise seeing his interviews as the man seems quite sensitive and well spoken. It’s a shame none of his eloquence translates through to his cinema.

Bazmee land is a cacophony of inane puns fired blindly at the audience. Calling them double entendres would be too smart a word. It’s just words that sound like other words (Tu teacher nahi, cheater hai)

The whole scenario is doused with Anees’ usual tropes i.e. mild rape references or hurting women physically (I counted 5), husband cheating on their wives treated as a mild faux-pas (a thread that annoyed me to no end in his previous disaster Thank You, a film where the hero slaps one of the backup dancer in a song for no apparent reason) and just a general patronization of womankind even when trying to endear them. At the climactic fight sequence where we should be cheering on the hero, a throw away joke is made that just leaves a bad taste.

The mind of Anees Bazmee is a dirty horrible conservative place which I do not wish to visit but this is supposed to be a family entertainer which makes it even more worrisome. His brand of humor seems to work though as most of the auntijee’s who had snuck in bottle of hot sauce to pour over their chips were laughing harder than anyone in the audience. And this will make a ton of money which in turn will allow Anees Bazmee to make more of these movies.

Besides all that, he is just an incompetent director. The comedic beats are off, the editing is shoddy and the times Ready beats you in submission and you do start laughing you feel you need to take a long  shower like Elizabeth Shue in Leaving Las Vegas.

I want to try and explain the plot of Ready but instead I have the perfect visual presentation:

But if that doesn’t work for you. Here is a summary:

Prem Kapoor (Salman Khan) is a good hearted rascal/kameena/kutta/dog that lives with his joint family of uncles and aunties. All the uncles have a quirky trait so it makes it easier to keep them apart, the aunties are not so lucky. Sanjana walks into their family posing as Pooja (some really old lady waiting at an airport that we’re supposed to believe is a bride to be for Salman Khan) trying to escape her evil uncles who want to forcefully marry her off to their brother-in laws to usurp her riches.

Prem and Sanjana end up falling in love just before the interval. After the interval Prem poses as an an accountant for Sanjana’s mafia uncles and tries to go all DDLJ on ’em in Salman Style via way of a speeded up chase climax a la Priyadarshan.

Don’t you wish you had just looked at the picture instead of reading that paragraph?

The first half is just a slog to sit through. The family dynamic is annoying and the pace is just dead slow. Post interval things pick up and this is solely because the appearance of one man that should be wearing a big ‘S’ on his chest and that man is Paresh Rawal. Everything the man says or does is just freaking hilarious and every scene he has is probably the best the movie ever gets. Too bad he didn’t have a bigger role and didn’t have more scenes with Salman.

The movie just feels very heavily edited and tinkered with. Whole joke sequences and reaction shots are done behind a blue screen. There is even a voice over at the start of the movie establishing characters which substantiates the rumors that the director took a back seat. Instead Salman Khan and the producers tried to readjust as much as was salvageable of the movie. They did try really hard but the whole base is off and there is only so much polish a turd can take. 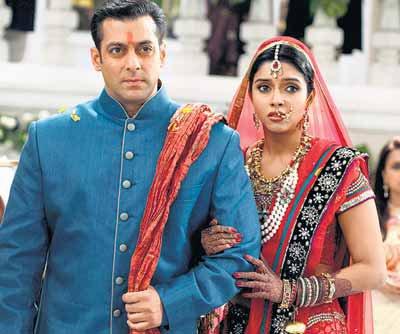 Character Dheela (Zarine Khan looking very pretty), Dhinka Chika and Meri Ada (Rahat Fateh Ali Khan FTW!!!) are awesome to look at and you do get forget how badly they are placed within the narrative.

The song sequences, the production design, the action which were rumored to be tinkered with are shot lavishly and pretty much the best part of the movie. Especially as this is the moments that Asin can shine as she doesn’t have much to do in the second part of the movie which is really surprising as her character is a real kameeni and churratth (not my words) in the first half.

Salman khan has free reign like a lion that can not and will not be tamed by anyone. He stands, dresses and jokes as he pleases and no man will come between him and his understanding of his audiences.

But our hero can sure pack a punch when needed even if he seems a bit puffier then he usually is. His obligatory shirt taking off scene is even heavily CGI’ed and played as a joke that really isn’t a joke. I won’t say more as I don’t want to spoil the few jokes that did work for me at least.

Your enjoyment of Ready is really dependent on how much you enjoy watching Salman on screen and how much you want to be entertained as you walk into the theatre.

A good comparison is last week’s Hangover part 2, a movie based on a finely calculated scientific formula of laughs per minute and dependent on the appeal and familiarity of the audience for its stars. Like a blind man with an UZI in a dance hall, some jokes are bound to find a target. More than anything this movie is a success in terms of production, marketing and above all timing.

Go in with your expectations set to low, wanting to laugh and if you can go in a group do so as even then you will only have a moderately good time. Damn you Bazmee, Damn you!!!!