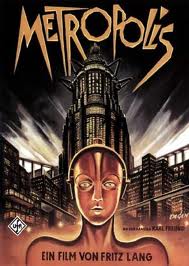 As far as Upod is concerned, anything is game: who else would bring you reviews of Black Sheep, Let The Right One in, Lord of War and 500 days of summer?

I recently had the opportunity, courtesy of the British Film Institute (BFI) to watch the most up-to-date and restored version of Fritz Lang‘s masterpiece, Metropolis on the big screen.Â  So in a departure from the usual Upod frivolities I made my way to London’s Southbank and settled down to some serious cinema history.

There has been much written about this film over the years and to be honest there is very little that I can add to what already exists.Â  What I can however say is that I was simply stunned byÂ a silent film that is 83 years old.

Produced when German cinema was at the height of its influenceÂ itÂ is also the most expensive silent film ever made, costing around 5 million Reichsmark at the time.Â Â Let us not forget howeverÂ that this is essentially a sci-fi film and one with such vision and fine execution that modern audiences will have no problem marvelling at the special effects.Â  Whilst we are nearly all so accustomed to a faster pace of film (Anton Corbijn‘s The American being a notable exception in recent times) with quick cuts and sharp editing, it is testament to Fritz Lang’s skill as a film-maker that for 150 minutes I never felt bored or wanted to look at my watch.Â  Indeed, I was so taken by the story, acting, set designs and musical score that I could have happily sat there for another hour.

Â As this version is the latest and greatest, restored from reels found in Argentina, I will conclude by wholeheartedly recommending this on Blu-Ray.Â  If you have had any doubts at all about tucking into black and white silent cinema, thisÂ really isÂ a treat to behold and worth every penny and minute.