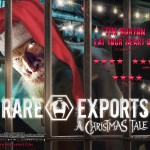 When I heard the words “Evil Santa movie” I was sold. The trailer was smart, brooding and promised a very dark film twisting the usual conventions of the annual bearded gift giver. So does this Finnish flick -that’s receiving some excellent reviews- live up to the promise? Check out our full review after the jump!

Finland, or at least the borders of Lapland where this movie is based in, seems a desolate place with kids sporting lesbian haircuts, dressed in 80â€™s clothes but not the fashionable kind and no one smiles unless you’ve just captured 120 naked geriatric men in a deer cageâ€¦but more on that later.

Â I will first have to admit something before you dig into this review and it might be shocking to some but I truly, truly hate Christmas and everything to do with it. Christmas to me is what Valentineâ€™s Day is to single people. A commercial holiday shoved down my throat were people have the their eyes filled to the brim with hopes which will turn into desperation in a blink of an eye when they start stressing out about finding the right gift, the disappointment of Boxing Day and the family get-togethers that never turn out the way they imagined.

I do realize that none of my complaints are really valid or original and the real reason I hate christmas is that Santa never brought us any presents when we were kids. So I purposely avoid any festive movies be it Itâ€™s a Wonderful life or Fred Clause and the ones I actually enjoy are movies like “Bad Santa” starring Billy Bob Thornton where he plays a drunk loser with a midget assistance to rob the department stores they work in. All this to say the magic of Christmas is lost on me.

So, Rare Exports is adapted from short movie by director Jalmari Helander starring some of the same actors. We are taken to a reindeer Herder community near the border of Finland and Russia. Whilst the community is preparing their annual deer catching ceremony (I have no clue what you call this activity, Iâ€™ve always been a city dude) There is also a group of scientist trying to find a hidden burial space deep in a mountain that might contain the remains of the real Santa who according to legends wasnâ€™t the benevolent and jolly figure popularized by Coca Cola but someone who tortures and punishes naughty children.

Â When the villagers realize that all the reindeers they were waiting for have been slaughtered and mostly all children and heating equipment (radiators, hairdryers and stoves) start disappearing that thing start taking a darker turn. We follow a father and son who are the main characters who find an old bearded man caught in their wolf trap who at first glance is a near corpse but start getting alive at the whiff of gingerbread and children that things start getting interesting. Although the movie gives the impression of being a dark comedy, I felt itâ€™s more a childrenâ€™s movie but not the kind we have been seeing the last few years and especially Disney has been churning out but the type of darker movies we used to see in the 80â€™s eg the Goonies or Labyrinth. You have the usual tropes of single non-communicative parents just not understanding their kids (and the kids being proven right at the end), not being able to connect with them or come to terms with their own grieves.

Â Rare Exports does however manage to do all this lot subtly then you would expect. The landscape and photography is breath taking and although I would never consider visiting Lapland (again Iâ€™m a city dude and it looks way too cold ) I have to admit it is a beautiful place . The premise of the movie is pretty cool twisting the Santa fable unfortunately I donâ€™t feel it completely delivers on the promise of the trailer. The performances are stoic and the humor is dry but this might be just because the movie is very Finnish and works within the premise laid out by the original short story.

Â Unlike District 9 (however which followed the same developed path) Rare Export doesnâ€™t have enough meat for a full feature and the layers they do add e.g. the Frozen Santa which needs to be destroyed, are plain filler. I also felt that the buildup of the final fight didnâ€™t pay out at the end I felt I had missed something or the movie had ended a bit too quickly. And although the trailer doesnâ€™t make it entirely clear most of the movie is spoken in Finnish, which wasnâ€™t a problem but I just hate it when non-English movies cop out to mention the spoken language in the marketing material to get a handful more viewers in.

I do feel the reviews are being too favorable. Rare Exports is currently enjoying an 87% Positive Rotten Tomatoes score and I do not feel that is justified even if you want to champion a small movie. All in all if you are like me tired of the saccharine sweet Christmas movie, you should definitely try it out.

Â Ps there is a lot of old dude nakedness, if you can handle itâ€¦

Â Here is the Short Movie Rare Exports was based on:

Let us know what your favorite Christmas movie is in the comment section below!