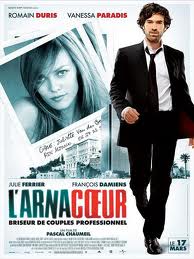 L’arnacouer
is a French movie with a
mistranslated English title
starring French Heart throb and box office golden boy Romain Duris and the lovely singer-actress
Vanessa Paradis. It tells the story of a Alex
Lippi, playboy for hire specializing in breaking up relationships where the
woman is unhappy or in a relationship with someone who isn´t worthy of her.
Usually this happens at the behest of a family member who feels someone needs
to just “open their eyes” and Alex does this eye opening through the
power of seduction, setting up elaborate romantic scenarios aided by his sister
played by Julie Ferrier, recently seen as an acrobat in Mic Macs, and
Brother-in-law Marc, played by the hilarious Francois Damiens (JCVD).

Alex is coerced into taking on a most recent
assignment to break up Juliete Van Den Bergh, daughter of an all round
influential and shady crime boss, who is about to marry her seemingly perfect
English fiancee. You can guess pretty much what happens next but the true
strength of this movie is how it has handled a storyline which would be hackneyed
in anyone except Laurent Zeitoun and Jeremy Doner script. Like Zeitoun’s
previous effort “Prete-moi ta main”, he is able to add a lot of zing
to the usual Rom-com. Check out our full review after the jump!

Well, it really is the treatment, At the start of the movie Alex narrates in a snappy
voice-over that he has a certain set of rules when doing his business. You know
he’s going to break every single one of those rules. You know Alex and Juliete
will fall in love eventually even after most of Alex’s set ups back fire in the
most painfully cringe worthy ways. We know there will be a weepy feel good
ending but the way this movie get’s to that is so refreshing and zippy that you
applaud the scriptwriters.

Romain Duris has been a critics favorite since “The Beat My Heart Skipped”
which I found highly overrated (listen to my rant on director Jacques Audiard
in Episode 4 of Upodcast with special guest Loops)
but here he is the main star and the movie is pretty much stand on his
shoulders. Alex is a character that fails in front of our eyes many times and
that’s why we find him appealing. He also manages to shake a leg although he is
nowhere ready to take on our Bollywood heroes or even Patrick Swayze ( known for throat ripping in Road House).

never properly sketched out. Mrs Jonny Depp is a very proficient actress as we
have seen in “Les Noces Blanches” and the heartbreaking
“Eliza”, with the ever watchable Gerard Depardieu,but unfortunately
she is never able to rise above the aloofness and distance her character
creates. You never truely understand her motivations for loving one man and
then the other. And overall she is actually quite selfish for no good reason. I
have to add I am a huge fan of Vanessa Paradis and I have taken much shit for
making this claim boldly and openly but she manages to hypnotize me and maybe
her bare back yoga pose in 90’s International pop-hit “Be My Baby”
was part of my journey of self-discovery as a bouyant heterosexual male. So
every frame she was in, I was glued to although I never really understood what
Juliete was all about and why these men love her.

I think most of the blame lies with the director who honestly doesn’t shine as
much as his script. Although the locations are beautiful and so are the stars, Francois
Damiens never delivers on the promise to the audience. He has
assisted Luc Besson on a few of his films but is mostly
known for TV work. His is a name I will not be looking up although now that the
movie is finding an International audience (Picked up by IFC)  he is getting most of the praise.

If you are looking for a rom-com that manages to offer something fresh, is
breezily paced packed with laughs and beautiful stars and locations go watch
this movie.

It will offer you something new in a genre that usually isn’t the most refreshing.
Another good reason to watch this now in French is that it probably will get
remade in one way or the other. It’s just is that kind of movie.

For our Bollywood fans there are 2 scenes in this movie that are very reminiscent
of Dil hai ke Manta Nahin
and Kites, do let us know if you pick up on them in the comments section below!

I am off to watch screenshots of Vanessa Paradis now and listen to Be My baby,
what can i say I love the crooning!