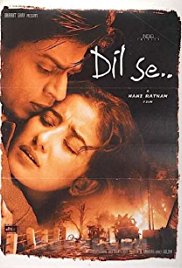 On Episode 19 of the Khandaan podcast, we continue our limited edition run of favorites with everybody’s preferred incendiary film critic, Raja Sen. A reviewer with Hindustan Times and the author of a children’s book based on The Godfather (!), The Best Baker in the World, Raja has chosen Mani Ratnam’s Dil Se (1998) to discuss.

Celebrating its 20th anniversary this year with a brand new restored print available on Netflix, this movie threw up some interesting reactions on the panel. Raja maintains that this is Shahrukh Khan’s best and most natural performance to date, but Sujoy and Amrita had issues with the film on a personal and political level. Asim was too dazzled by Preity Zinta to care.

Starring Manisha Koirala as a beautiful young terrorist from India’s Northeast, SRK as a radio journalist, and Preity in her breakout debut as the fresh young thing next door, Dil Se has garnered quite a reputation over the years even though it underperformed upon release. We discuss this phase of SRK’s career, our issues with the performances, and of course no episode of Khandaan is complete without a little gossip.

We also discuss some of the new releases over the past fortnight – from the Spiderman video game to Stree, which is garnering stellar reviews (including one from Raja). We also touch upon Amazon’s Jack Ryan, a series that Asim and Amrita took serious issue with.