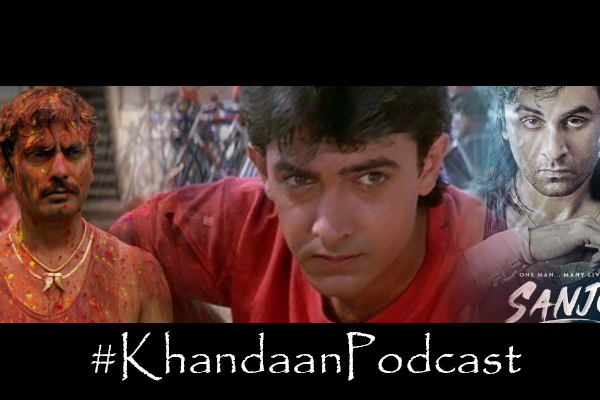 In Episode 15 of the Khandaan Podcast, we switch up our format for a special series: over the next few episodes, we will discuss movies nominated by our audience as their all-time favorites. We begin with 1992’s Jo Jeeta Wohi Sikandar. Starring Aamir Khan, this was the second film made by cousins Aamir and Mansoor Khan, co-starring Ayesha Jhulka, Dipak Tijori, Pooja Bedi, and the always reliable Khulbhushan Kharbanda among others.

We are joined this week by The Guardian’s Mike McCahill, who was watching this movie for the very first time whereas Asim, Sujoy and Amrita grew up with this film and its soundtrack as a constant in their younger lives. This movie is also rich in Bollywood trivia, some of which might be found here in the reunion staged by Anupama Chopra and Rajeev Masand (yes, this is the same video that almost drove Amrita mad.)

We also discuss the brand-new release Sanju, the whitewash special directed by Raju Hirani starring an eerily excellent Ranbir Kapoor, who rebounds in style from a couple of years of less-than-successful films. Co-starring Sonam Kapoor, Vicky Kaushal, Paresh Rawal, Manisha Koirala, Karishma Tanna, Anushka Sharma, and Dia Mirza, this movie should have been a knockout but sadly isn’t.

Lastly, we look at Sacred Games, the first Indian original commissioned by Netflix. Starring Saif Ali Khan and Nawazuddin Siddiqui in the lead, ably supported by a large cast of pitch perfect actors (including Kubra Sait, Radhika Apte, Neeraj Kabi, Jitendra Joshi and others), it’s based on the Vikram Chandra novel and adapted to screen by Varun Grover, Smita Singh (not Bansal as Amrita says in the podcast, sorry), and Vasant Nath. Co-directed by Vikramaditya Motwane and Anurag Kashyap, this series sparked quite a bit of conversation.

Note: The Khandaan podcast is an interactive experience! Please click below to vote for the next movie you think we should feature. For episode 16, we have Shah Rukh Khan’s early era.